While the issue of the suspension of trade license of the Golden Chariot Hotel at Goregon, following a massive fire in December last year is still to be resolved, the Golden Chariot’s sister concern involved in similar irregularities has been continuing despite revocation of its license too.

A huge fire broke out at the Golden Chariot located at the Hub Mall, Goregon East, in December last and the management was accused of carrying out structural changes, in violation of the safety norms. The hotel’s Eating House trade License No. 761434569 was cancelled by the BMC. But, subsequently the Golden Chariot challenged the revocation of license.

After hearing the arguments advanced in the notice of motion, the Principal Judge of the City Civil Court, vide his order dated April 13, 2017, stayed the suspension of the license till June 30, 2017. As such the Golden Chariot has continued with its routine business. Now, the matter is slated to come up for hearing on June 30, 2017.

It maybe recalled, that the application for trade license of the ‘Golden Chariot Hospitality Services Private Limited’ was rejected by the fire brigade on October 13, 2014, for not producing relevant documents and also due to the discrepancies in the documents. Subsequently, the license was granted to the hotel.

However, it has also come to light that Golden Chariot’s sister concern ‘Balaji Grand’ located in the same premises, also sails in the same boat. Based on a complaint by the Right To Information (RTI) activists Shaikh Fakruddin Juned and Sulaiman Bhimani, the Divisional Fire Officer (DFO) A V Bangar, vide his letter dated February 12, 2016 had directed ‘Balaji Grand’ not to carry out trade activities till all the safety norms are implemented. Subsequently the BMC’s Assistant Commissioner (P South) on December 1, 2016 had issued a show cause notice to ‘Balaji Grand’ asking why its trade license No. 887353104 should not be revoked.

But according to the complainants Shaikh and Bhimani, “Balaji Grand has been continuing its activities regardless of the action by the BMC and the fire department. The ‘Balaji Grand’ has obtained the trade license showing the operational area as 188.56 square mtrs, whereas the hotel was using 216 square mtrs area. Besides, it had kept very narrow passage of 2.8 mtrs for patrons to access wash rooms.

The hotel has also erected a loft over the kitchen area without obtaining the approval of the concerned authorities including the fire department, which was highly objectionable from the safety point of view. Also, the kitchen was not provided with a rear exit as per the requirement of the fire department’s No Objection Certificate (NOC) No. FBL/S/409/67 dated April 16, 2009 which was highly objectionable.

When contacted, the Balaji Grand officials maintained that a relevant explanation has been given and the documents are submitted to the concerned authorities. However, according to Shaikh and Bhimani, the stay granted for the Golden Chariot cannot be used as a blanket to cover the irregularities in Balaji Grand.

Link to the news paper http://www.afternoondc.in/city-news/flouting-of-norms-continues/article_196342 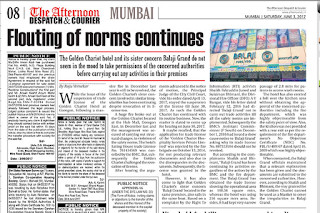