Skip to content
10th July, 2017, Mumbai: I handed over a letter to Mr Gautam Chatterjee, Chief of Maharashtra Real Estate Regulatory Authority (known as MahaRERA), with a sample of one prominent builder’s draft of “RERA-compliant Sales Agreement”, and the issues contained in that draft. In it, I pointed out the various shortcomings of this draft, which were not only unfair to the flat-buyer, but also untruthful and unlawful.
Mr Chatterjee spared some time to meet me and explained that those aggrieved by such unfair agreements thrust upon them by any builder should complain online after registering themselves as complainants on this website: https://maharerait.mahaonline.gov.in/login/UserRegistration , and file a complaint, accompanied by fees of Rs 5,000/-, which will then be heard by the Regulatory Authority or the Adjudicating Authority.

For the guidance of flat-owners and investors, I have reproduced below the letter that I submitted to Mr Chatterjee.

My activist friends and I are impressed by your deep knowledge and hard work. I have faith in Maharashtra’s Real Estate Regulatory Authority (MahaRERA).

However, the common people do not have such faith. People feel that MahaRERA will fail to make builders deal fairly with the common man. They feel that builders will stick to their bad old ways. There are many reasons people’s lack of faith. One major reason is builders are taking RERA very lightly. Even after MahaRERA came into force, builders are still forcing home buyers to sign agreements containing outright lies and many clauses that are against the buyers’ interests. Here is Exhibit A  https://tinyurl.com/Ekta-MahaRera-Agreement

This is the Agreement draft of Ekta Tripolis, Goregaon, and is supposedly compliant with RERA. It is almost identical with agreement formats uploaded on MahaRERA website for other registered projects of the builder group called Ekta, owned and headed by Mr Ashok Mohanani. You are not pulling up this big builder for ramming such an agreement down the throats of home buyers, so why will the common man have any faith in MahaRERA?

Unfair & Untrue Clauses in Ekta builder’s “RERA Agreement”:
1) This “standard clause” is generally a false claim. Pg 12: “(cc) On demand from the Allottee, the Promoter has given inspection to the Allottee of all the documents of title relating to the said Land… and the plans, designs and specifications prepared by the Promoter’s Architects… and of such other documents as are specified under the RERA and the Rules and Regulations made thereunder.”

2) Allottees who may have paid as much as 100% of the consideration are today being told to falsely state that they have only paid 10%. Pg 15: “(iv) The Allottee has paid before execution of this Agreement, a sum of Rs. [●]/- (Rupees [●] only) (which does not exceed 10% of the Sale Consideration) as advance payment … ”

3) This clause completely disempowers the buyer. Pg 16: “Time for payment of each installment is the essence of the contract. The Allottee hereby agrees, confirms and undertakes that an intimation forwarded by the Promoter, that a particular stage of construction is commenced or completed shall be sufficient proof that a particular stage of construction is completed. However, it is agreed that non receipt of such intimation requiring such payment shall not be a plea or an excuse by the Allottee for non-payment of any amount or amounts…”

4) This clause threatens to dispossess the buyer even if he pays the full consideration. “…Any payments made in favour of any other account other than mentioned hereinabove shall not be treated as payment towards the said Flat/Shop/Office and shall be construed as a breach on the part of the Allottee, in which event without prejudice to the right of the Promoter to charge interest at the prevailing rate of State Bank of India Highest Marginal Cost of Lending Rate plus 2% thereon on the amounts due, the Promoter shall be entitled to terminate this Agreement and forfeit 10% of the Sale Consideration along with brokerage charges (if any) as reasonable, pre- estimated, genuine and agreed liquidated damages and return balance (if any) to the Allottee within 30 (thirty) days from the date of such termination of the Agreement.” RERA does not authorize the builder to terminate the agreement unilaterally on such grounds.

5) RERA does not envisage such forfeits. Pg 18 – “7. Voluntary Cancellation By Allottee. In the event, the Allottee desire/s to cancel the allotment of said Flat/Shop/Office for any reason whatsoever, then Promoter shall be entitled to forfeit the amounts equivalent to 10% (ten per cent) of the Sale Consideration and the Allottee shall not be entitled to such amount paid by him/her/them/it to the Promoter.”

6) These arbitrary clauses dominate the buyer psychologically and financially: Pg 20 – “Event Of Default And Consequences – (i) The Promoter shall be entitled (but not obliged) to terminate this Agreement on the happening of any of the following events (“Events of Default”): …(e) If the Allottee is/are, convicted of any offence involving moral turpitude and/or is sentenced to imprisonment for any offence for not less than six months; (f) If Receiver and/or a Liquidator and/or Official Assignee or any person is appointed of the Allottee or in respect of all or any of the assets and/or properties of the Allottee. (g) If the Allottee have received any notice from the Government in India (either Central, State or Local) or foreign Government for the Allottee involvement in any money laundering or any illegal activity and/or is declared to be a proclaimed offender and/or a warrant is issued against him… (i) If the Allottee fail/s to make payment of any outgoing/s, taxes, maintenance charges etc…” How is the builder concerned with bankruptcy proceedings, moral turpitude, etc? How can such extraneous factors enable a builder to dispossess his customer?

7) Arbitrary “standard clauses” for suppressing the buyer. “(ii) On happening or occurring of any of the Event of Default, the Promoter shall without prejudice to all other rights that the Promoter may have against the Allottee either under this Agreement, or in law or otherwise, give 30 (thirty) days notice to the Allottee to rectify/remedy such breach and during the notice period, the Allottee shall be liable to bear and pay interest at the prevailing rate of State Bank of India Highest Marginal Cost of Lending Rate plus 2% thereon on the due and payable amount. In the event Allottee fail/s to rectify/remedy the breach within notice period, then the Promoter shall be entitled (but shall not be obliged) to (i) forthwith terminate this Agreement (“Termination Date”) and (ii) forfeit/deduct all amounts mentioned in… above and balance if any, shall be refunded to the Allottee without any interest within 30 (thirty) days from the Termination Date. It is further clarified that any profit arising from sale of the said Flat/Shop/Office to the new Allottee shall be of the Promoter and the Allottee shall have no claim against the same.”

Mr Chatterjee, Sir, such unlawful clauses may eventually be struck down if an allottee painstakingly challenges them, but in the meantime, they undermine public confidence in MahaRERA’s authority. Will you please promptly forbid such terrible agreement formats, and restore the people’s confidence? Sir, the public’s eyes are on you. Your actions must now speak louder than your words.

PS: After the onset of RERA, the older version of the agreement based on Maharashtra Ownership Flats Act 1963 (MOFA) may seem obsolete. But it is not so, because thousands of flat-buyers have signed such agreements quite recently, and consider themselves bound by their clauses. Ekta’s “MOFA agreement” format is even more horrendous than the RERA agreement. See Exhibit B. https://tinyurl.com/Ekta-Tripolis-MOFA-Agreement

The horrendous clauses are elaborated here in Exhibit B2. https://tinyurl.com/Issues-in-Ekta-Agreement

For many years and decades, Ekta and such other builders have been spreading misinformation about the legal entitlements of flat-buyers. Mr Chatterjee, you now have jurisdiction to curb this. Will you please exercise your jurisdiction to the fullest? 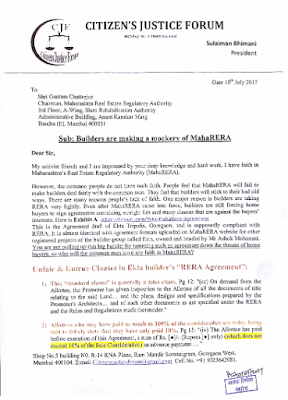