Mumbai
Even after flouting norms by issuing fake work experience certificates to help a private contractor bag a contract worth Rs 70 crore, the Mumbai Metropolitan Region Development Authority has no plans to lodge a First Information Report against its engineers that were recently suspended. The engineers, A K Pahal and P K Veni, were suspended for forgery a fortnight ago.
According to the probe report, the suspended engineers had helped contractor, NA construction, by giving fake certificates to bag a storm water drain project in Haryana. The authority is currently probing into the matter on its departmental level. Officials said that all of the certificates issued by the suspended engineers will also be scrutinised in order to ascertain their involvement in other projects.
Interestingly, both the engineers have accepted their involvement in the forgery act. A senior MMRDA official on conditions of anonymity told the Free Press Journal, “We are conducting a departmental inquiry and will take further action on basis of the conclusion of the inquiry report. We are not planning to lodge an FIR but the officials will be thrown out of service.”
Activist Sulaiman Bhimani, who has filed numerous complaints of corruption against A K Pahal, alleged that Pahal used NA constructions as a proxy contractor for his son. He said, “This tender process was just an eyewash as the actual person who was supposed to carry out the project work was Pahal’s son. He had also attended the pre-bid meeting. Moreover, Veni is junior to Pahal and have signed the certificates on the latter’s orders.” Bhimani added that Haryana, where the storm water project was supposed to be carried out, is the home town of Pahal.
“I fail to understand the authority’s denial in filing a police complaint and is still conducting a department inquiry despite of the fact that the engineers have already pleaded guilty,” Bhimani added.⁠⁠⁠⁠ 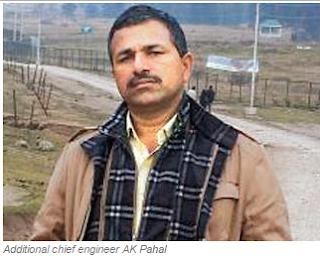