Mumbai, 26th December, 2016: Mumbai Police recently filed FIR against K Raheja’s Palm Grove Beach Hotels Pvt Ltd.Reason? Violation of Town Planning Act by unauthorized construction of a drainage line in November-December 2015.Many months earlier, Palm Grove misled MCGM into giving Drainage Completion Certificate and  Occupation Certificate(OC) for their new building Horizon Green without drainage. To make up the lacuna, the developer belatedly built a drainage line going uphill. That’s right, uphill!
The Deputy Municipal Commissioner’s remarked on 5th January, 2016, “Validity of issue of occupation certificate dated on 18.4.2015 is doubtful“.  If any flat-owners take possession and come to stay in their flats, they are in for a rude shock.When they start having baths and flushing toilets in sufficient numbers, their sewage will overflow.
See level difference in two blue circles in this drainage plan 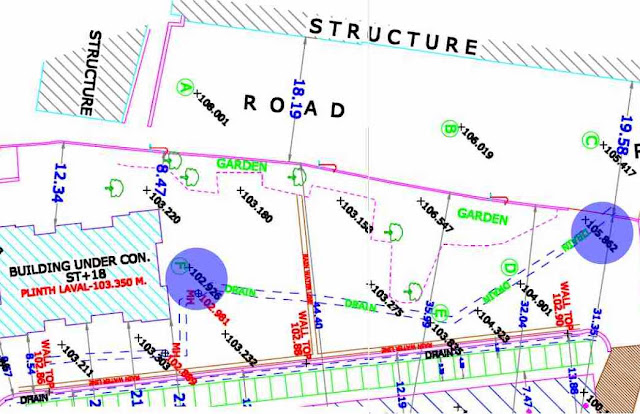 Near the building, the drainage is 102.926 metres above mean sea level. Further down the line, the level is 105.862 metres – three metres higher, i.e. up the hill. The explanation given by K Raheja’s CEO, M D Chande, is that “adequate slope is available between the last chamber in the building and the manhole on Municipal road to which the line is connected is confirmed by emptying water tanker in the last chamber in the presence of municipal staff.” However, Mr Chande steadfastly refuses to back his claims with any figures i.e. metres above sea level, degree of slope, etc. Home buyers should remember that a slope of one foot per ten feet of length is needed for sewage sludge to flow; otherwise silting, stagnationand overflow are bound to happen.
Mr Chande alleges that as their neighbours deliberately blocked the old drainage line, he was forced to build the new uphill drainage.
Mr Chande claims that MCGM’s Assistant Engineer – Maintenance gave NOC dated 20th November 2015 for the uphill drainage line without requiring the builder to submit any plans or diagrams.
“Why seek NOC from Maintenance department? Why not Building Proposal department?” we asked Mr Chande. His reply was that after giving OC, Building Proposal has no further jurisdiction. So he was forced to approach Maintenance Department. But  MCGM disregarded the Maintenance Department NOC and issued instructions to prosecute Palm Grove Beach Hotels for “unauthorized lying of sewer pipeline and drainage work”. Read MCGM’s Designated Officer’s sanctionto prosecute.
DMC’s remarks
MCGM’s Deputy Municipal Commissioner wrote an office memo in January 2016, titled “Full Occupation Certificate issued… without completing all necessary works in the building”. The DMC wrote: “It is reported that Building Proposal Department have given full Occupation Certificate to Building No. 6 on 18.4.2015… It is seen that now developer has started the work of laying drainage line. Designated Officer R/Central Ward had issued stop work notice on 9.12.2015… This clearly shows that before issue of occupation certificate, the drainage work was not completed.” See the screenshot below. 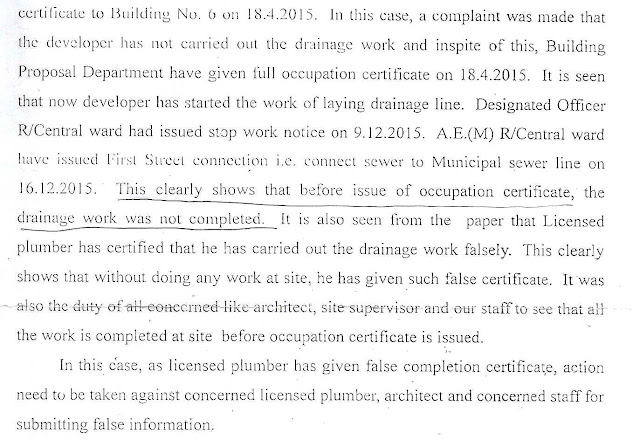 The DMC’s memo can be read at: http://bit.ly/KRaheja2
Catching small fish & setting the big ones free
The Assistant Police Inspector’s statement prior to FIR mentions the mukadam Ramesh Kishan More, “Manager” Mr Chande and supervisor Virendra Dube. Read the statement: http://bit.ly/KRaheja4
As always, even while filing an FIR, the authorities catch unimportant minions and let the bosses go free. So, who were the persons named in the FIR? Not the directors of Palm Grove Beach Hotels and note even theproject’s architect. At first, FIR was registered against Mr Chande and Mr Virendra Dube, a site supervisor working on contract basis. Here’s the screenshot.

Later, the FIR was further diluted by removal of Mr Chande’s name with white ink, and its replacement with Mr Dube’s name, evidently because they represented to MCGM that Mr Chande, CEO, is “not concerned in this matter”. So Mr Dube’s name is mentioned twice in the same sentence. See the screenshot below:

So the blame for this multi-crore rupee fraud is being pinned only on a site supervisor who has zero discretionary powers and only follows orders. One is reminded of Justice S J Kathawalla’s recent reprimand to EOW in a case concerning a builder… someone drags Palm Grove before Justice Kathawalla!
ISSUED IN PUBLIC INTEREST BY
Krishnaraj Rao
9821588114
krish.kkphoto@gmail.com
Read K Raheja CEO’s detailed rebuttal to this press release.
POSTED IN PUBLIC INTEREST BY
Sulaiman Bhimani
9323642081
sulaimanbhimani11@gmail.com
(Visited 226 times, 1 visits today)