7th September, 2016, Cuttack: Earlier this week, Justice Indrajit Mahanty of Orissa High Court admitted that he “carries a loan burden for his long-time business outfit”, through an opinion piece that was written on his behalf titled “Media sensation at times hits great guys, hurts society” in The Pioneer. (The “loan burden” is a Rs 2.5 crore working-capital loan for his hotel, The Triple C, which was borrowed in 2009 from SBI. Till this day, amounts ranging between one and two lakh rupees are drawn and repaid every month in the name of “Justice Indrajit Mahanty”.) The author, clearly adores Justice Mahanty, writes, “As a lawyer, he became too eminent too soon only because of his keen commonsense, command over the English language and the superb manner of making complex Acts simple for judges and clients alike. He drives points home the same way as smart kids do tricycles.” The point of the article is that it is acceptable that Justice Indrajit Mahanty has a big business loan to his name, and runs a hotel, because of his love for humanity, and therefore, our article questioning the ethics of his actions is a “terribly misplaced allegation”. The author argues, “Yes, there is a loan burden, not a robbery charge. Yes, he ran it to add value by generating employment for many. The only thing people would like to know is whether or not his ‘judicial conduct is appropriate and above board’; whether or not he is selling judgment, and if he has the knowledge and skills to help the suffering humanity.”

Is this a reasonable argument?

The implications of a high judge taking a business loan from a bank, and using it to run a hotel, are far-reaching. Although Justice I. Mahanty is only 55 years old, he is already number two in seniority at Orissa High Court. Being the son of well-known Barrister Ranjit Mohanty, he is influential and well-connected in the legal fraternity. In the next 5-10 years, his career track can make him Chief Justice of Orissa HC, a Supreme Court judge and even Chief Justice Of India. 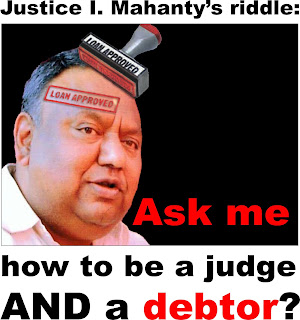 However, The Triple-C Hotel can be need not necessarily be a success story. Experienced businessmen like Vijay Mallya often fail to repay the banks; so, is it totally improbable that a part-time businessman like Indrajit Mahanty may fail to pay back what he owes to State Bank Of India?

What happens if Justice Indrajit Mahanty defaults and the matter goes to Debt Recovery Tribunal?

Apologists and admirers of Justice Indrajit Mahanty, please remember that this is not about one man’s goodness or integrity, it is about the integrity of our judiciary as a whole.