Moreshwar was uneducated and married; he left a year-old a son and wife in the middle of her second pregnancy. Suraj had a vocational diploma and was a bachelor. They had never met each other. But their short lives ran parallel and ended on the same note. They died within a span of few hours.

In a dingy mortuary of government hospital in Ghatanji town of Yavatmal district, that day, Suraj’s body was being taken in for post-mortem while Moreshwar’s was moved out. It became an unlikely meeting place for the two families joined in grief that stemmed from a common thread: cotton.

Rains came after the crops had failed. And when the abysmal yields began to flock the markets around November, prices had tanked. “This year,” Suraj’s elder brother Swapnil says, “There is no crop, no price.”

Vidarbha, a region in Maharashtra notorious for farm suicides, has seen such coincidences before. Except this time they are glaring. As it turns out, the months since their suicides have seen more farmers take their lives in the region. The neighbouring Marathwada, which faces water stress, is also reporting a spurt in farmer suicides. Put together, roughly 400 farmers, mostly young, have taken their lives in past three months in these two regions. And suicides are just one symptom of a deepening crisis. Reports of distress sales of land and cattle have begun. So have migrations of people, who need work.

“This is a negative farm growth year,” says Kishor Tiwari of the Vidarbha Jan-Andolan Samiti (VJAS), a fact borne out by the Maharashtra Economic Survey 2014-15 published on March 17. It says state’s agriculture growth rate was in the negative owing to bad monsoon and failed crops. Barring sugaracane, all other crops have suffered a steep decline in yields ranging from 20-60 per cent. “Vidarbha and Marathwada are like volcanoes,” he says. “That’s because the entire rural economy is belted.”

By an official estimate, about 24,000 or over half of Maharashtra’s villages are facing drought-like conditions, a metaphor for drop in crop yields (indicated by a gauge called anewari) by over 50 per cent. That means roughly 10 million rural households – or two-thirds of the state’s peasantry is in trouble. Most of these are scattered all over the state, but worst affected ones are in Vidarbha and Marathwada.

It’s a deadly cocktail: erratic monsoon, crop failure, falling prices, growing indebtedness. As if this was not enough, a spell of hailstorm that accompanied incessant rains last week irreparably destroyed Rabi crops such as wheat and gram wherever they had been planted and were about to be harvested.

This is the first major test of the BJP governments in the state and Centre. The Fadnavis-government has announced an aid of Rs 2000 crore for drought-hit Maharashtra farmers; the Modi-government matched it with the same amount but details of how the money would be used are still sketchy.

Vijay Jawandhia, farmers’ leader and activist in Wardha, says: “Every year there are climatic aberrations and market volatilities; but the new government hasn’t stepped in to support farmers.” Maharashtra’s aid is paltry, he says. “The Centre hasn’t ensured better prices through market intervention.”

India’s domestic cotton consumption has been stagnant despite a jump in cotton acreage to a record 130 lakh hectares in 2014-15. That coincided with sluggish international prices and global demand.

At the beginning of current cotton cycle in June-2014, the International Cotton Advisory Committee (ICAC), a global think tank, said that with 1.8 million tons of surplus cotton and changes in China’s cotton policy, prices were unlikely to rise to the historic 2012-13 levels. That year a quintal of cotton fetched about Rs 6000 in local markets – perhaps the highest price in a decade or so.

In 2013-14 Moreshwar and Suraj fetched Rs 5000 or more per quintal of cotton and the yields were better (4 quintals per acre). This time the prices are hovering around Rs 3900-4000 and yields are two quintals an acre at best. So for the cotton growers of the region it came like a staggering pay cut.

China curbed its imports this year as it gave a greater incentive to its growers to improve yield and quality, as a result of which Xinjiang, the largest cotton-producing region in that country where the trial subsidy is being implemented, yielded a bigger harvest than last season, an ICAC release said last month. While China imported much of India’s cotton last three seasons, it did not in the 2014-2015 season.

In domestic markets, it meant a glut despite fall in cotton yields in states like Maharashtra. For, overall acreage and production has gone up. This should have prompted the government of India to intervene in the markets by proactively asking the Cotton Corporation of India (CCI) to step up its procurement in different parts of the country like it does every year so that the prices did not fall below the minimum support price threshold, Jawandhia explains. But the CCI has been reluctant to procure cotton given the poor demand and lack of counter-guarantee from the Centre to bear the burden if it incurred losses.

For sugar, Modi government announced an export subsidy of Rs 4000 per tonne last month to tide over the industry losses; but refused to support cotton farmers the same way, Jawandhia points out.

Even Maharashtra’s cotton marketing federation, an agency that once ran the monopoly procurement programme for cotton from 1970s until the 2002 season, did not procure much, leaving the farmers at the mercy of private traders, who won’t offer higher price since neither cotton exports would pick up, nor the domestic demand. So the falling yields and prices came as a double whammy for the farmers, already beleaguered by a long depressing negative growth in agriculture and sagging incomes. 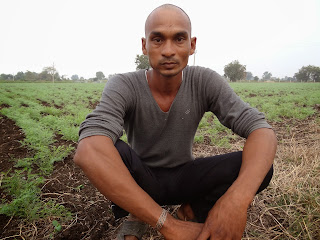 It was around 2 pm that day Suraj called his elder brother, Swapnil, 33, on his cell phone. It was to be their last conversation. “He told me to take care of our parents and then hung up,” Swapnil recalls at his village Anji. Suraj had minutes earlier left for home from Ghatanji cotton yard, distraught by the fact that their abysmal yields coupled with poor prices would not help them repay this year’s loans. Swapnil was still at the market when the call came. “Though I am older, Suraj looked after the farm as he was better educated,” he says. When he cut the call and could not be reached, Swapnil left his cotton-laden cart at the market and rushed home on a friend’s bike. Anji is five km from the town. Suraj, his mother told him, had left for the farm after touching her feet; he did not have his lunch.

“My fears came true when I reached our farm,” Swapnil recounts. Suraj lay unconscious in the midst of his cotton plants, some of them are wilting today and without any bolls. By the time he could be taken to Ghatanji hospital, Suraj had slid into a state of coma. Minutes later, Swapnil recalls, he died.

Around 4 pm his body was taken to the mortuary. That was when the Bhoyars realized that another young farmer’s body was being moved out. That was Moreshwar Chaudhary of Daheli village. “It was very heart-wrenching,” Anji sarpanch and a distant relative of the Bhoyars, Gajanan Bhoyar, recounts.

That morning Moreshwar went to his farm worried how to repay loans, his mother Gangabai recalls. Around 11 am, she was informed that her son had consumed pesticide and needed to be taken to a hospital. His friends put him in an auto and took him to Ghatanji hospital where doctors pronounced him “brought dead”. Moreshwar had consumed half-a-litre of pesticide, his neighbor Aakash Dambhare says. Tragedy had come calling back again on Gangabai exactly a decade after her husband Bharatrao committed suicide due to mounting indebtedness. She had lost her only son too.

On his 3-acre land that he began to till after his father’s demise, Moreshwar got 3 quintals of cotton this year when he should’ve got at least 15. A week before he took his life, he sold it for Rs 11,000. It would not help him repay loans. A look at his records shows Moreshwar was juggling multiple loans to meet his expenses. In his mother’s name he borrowed from two micro-finance institutions a sum of Rs 26,000. On that Moreshwar paid a weekly instalment of Rs 605. It was in addition to the crop loan from a bank and hand loans from relatives – together amounting to over Rs 1 lakh. He had also mortgaged his mother and wife’s gold ornaments.

Moreshwar had to borrow more than he could repay; he had no sources of income other than his farm.

Ten km away from Daheli, in Anji, the Bhoyars who own eight acres are yet to recover from the shock. Their story is no different. Loans now outweigh their income. Swapnil says they would need to sell off a portion of land to repay debt.

Suraj, an ITI diploma holder, lost his job five years ago after which he took to farming with his brother. “We could’ve sold our land; repaid our debts – what was the need to kill himself, we could have done something,” his bereaved father says. When rural youths get married at 24-25, Suraj kept postponing his wedding due to financial crunch, Swapnil says. “He was more of a friend to me.” 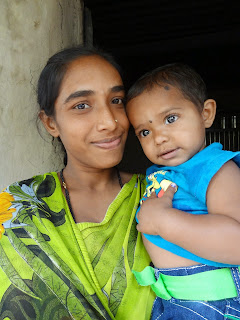 Moreshwar got married three years ago. He had a year-old son, Kanhaiyya. His young widow, Yogita, is in the eighth month of her second pregnancy. Putting up a brave-face, she says holding Kanhaiyya close to her: “He just deserted us.” Every time he gets up from his sleep the toddler searches for his father, Yogita says. Then his grandmother shows him Moreshwar’s framed photograph. As the young-one smiles looking at the picture, the grandma cries.
(Visited 51 times, 1 visits today)

1 thought on “Two Suicides, and the end of a promise”