Political parties in India are not required to account for small cash donations. This has been used to do much evil in India. Political parties should consider exchanging the troublesome notes for citizens as donations received and returned (for whatever reason, including “demonetisation”) and get the notes exchanged in bulk at the RBI (or deposited into their bank accounts and withdrawn as legal tender for further exchange).

The RBI cannot shrug off liability for these notes on whim. 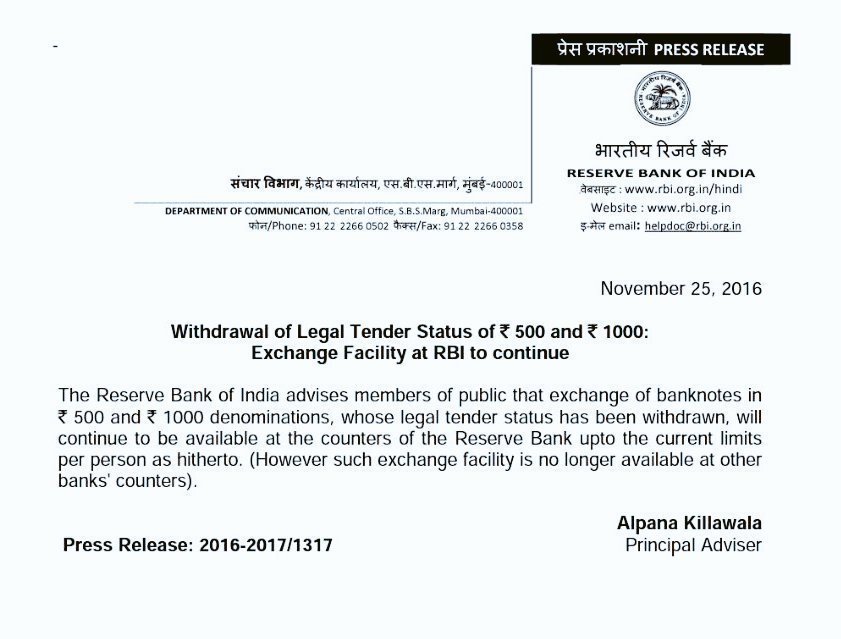 In current cash strapped circumstances, with banks no longer exchanging cash, the common man can hardly walk up on a daily basis to the RBI. It is an open secret that political parties can be and are used to launder money. For once, this laundering of exchange would actually be in the larger public good.

It is also an open secret that political parties spend considerable amounts of money to “buy” votes. This wouldn’t need them to spend a thing beyond the expenses of their own volunteers.

An open political campaign such as this would be a good protest move, help people and encourage them to feel an affinity with your local party office resulting in a win-win situation for citizens as well as political parties. Where distance deems it suitable, exchange and protest marches to RBI for exchange would allow people usually intimidated by the idea of approaching RBI to find comfort in numbers.

Even better, it would save political parties a hell of a lot of money they usually spend on voters, when they help voters survive the BJP. This matters when fighting a party as well funded as the BJP.

Note: I oppose opaque funding in political parties. I believe it violates the voter’s right to information on influences acting on the candidate they vote for. However, since parties have resisted transparency in accounts, in this instance I believe that it should at least be used for some good, for once.