No BMC action against Golden Chariot

Although the fire brigade has cancelled the NOC granted to the Golden Chariot Hotel, located at Hub Mall, Goregaon East, which was gutted in a massive fire on 29th December, 2016, the BMC is yet to take action against the hotel which was accused of blocking fire-exits and carrying out structural changes that allegedly led to delay in putting off the fire.
Deputy Chief Officer has cancelled the NOC (FBL/S/106/1076 dated 01/11/2006) granted to the hotel, vide his letter dated 6 th March 2017. However BMC’s P South ward office maintain that  although the notices have been issued to the hotel for violation of safety norms, the hotel has moved the court and the court has granted a stay in the matter.
Basically in the writ petition (105/2017) filed by the Golden Chariot Hospitality Services Private Limited against the state government, the rule is yet to be granted. When the petition came up for hearing for the first time, a bench comprising justices Naresh Patil and M.S.Karnik observed that, “Registry has not produced papers and proceedings of the present writ petition. Hence it stand over to 22 February 2017. In the meantime registry to trace out and ensure that papers are produced on next date of the hearing. Now the petition is to scheduled to come up for hearing on23 March 2017.

Speaking to The Afternoon D & C, Assistant Municipal Commissioner Santosh Dhond said, “The BMC has taken required action in the matter. But now the court has granted a stay in the matter”.

Senior Inspector of Police Jyotsna Vilas Rasam of Vanrai Police station said that the cases have been registered against the hotel under the Maharashtra Regional Town Planning (MRTP) Act 1966, as advised by the BMC. “We are moving as per the instructions of the BMC, which is supposed to look after the issues like how fire broke out ? whether unauthorised structural changes led to aggravation of fire ? etc”, she added.

RTI activists Krishnraj Rao, Shaikh Fakhruddin Junaid and Sulaiman Bhimani, who have been monitoring the case, maintained that the Deputy Municipal Commissioner Kiran Achrekar and Deputy Chief Fire Officer V N Panigrahi had ordered the closure of the hotel long back.

But the hotel continues to function, may be due to collusion with the  BMC officers. Initially the officers dragged their feet making it easy for the accused to move the court, they alleged.

It may be recalled that a complaint report of the Chief Fire Officer dated 14 November 2014, had pointed out many irregularities including unauthorised structural changes, closure of fire exits etc and had directed the BMC’s P south ward to take immediate action in the matter. The report stated that “The P ward shall be asked to urgently visit the premises to verify the license and the area of trade and activities of the “Golden Chariot Restaurant” and take appropriate action under section 394 of the Mumbai Municipal Corporation Act 1888, to stop unauthorised utilisation of additional area of the common passage for restaurant activities. The action of the hotel management could not be obtained despite many attempts. The catering staff at the restaurant said that everything was normal after the fire and now the hotel was functioning routinely
The high Court has not Granted stay to Golden Chariot but the AMC Psouth is protecting the culprit, the matter in the High Court is kept for admission and circulation as per High Court website
POSTED IN PUBLIC INTEREST BY
Sulaiman Bhimani
9323642081
sulaimanbhimani11@gmail.com 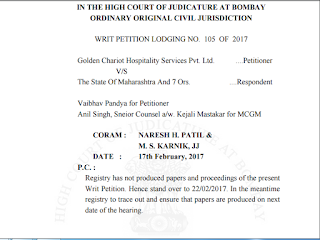