Skip to content
Mumbai, 13th January, 2017: K Raheja Constructions got away with lots of violations in their Horizon Green project in Borivali East. They succeeded in procuring Drainage Completion Certificate (DCC) and Occupation Certificate (OC) in early 2015 without actually constructing drainage. To hoodwink potential flat-buyers and early-bird occupants and emboldened by BMC officials’ complicity, the Rahejas tried to secretly dig a soak-pit in December 2015. The plan was to cover up the lack of a sewage connection by channeling the sludge into a soak pit and pumping it out every month. But this plan backfired when residents of the neighbouring building alerted BMC, who slapped a stop-work notice. But the Rahejas defied the stop work orders, continued the work and completed the soak-pit. So MCGM lodged a police complaint and got an FIR registered against the Rahejas.
Drainage is Horizon Green’s Achilles’ heel, because of the building’s awkward location on a slope. This project is basically built by over-exploiting the FSI of the existing “Raheja Green” layout plan, and because of this, the building suffers from major shortcomings, including lack of recreation ground, shortage of sufficient parking and mandatory open spaces, and, last but not least, huge hurdles in drainage disposal. Between 2006 and 2015, many mutually-contradictory drainage plans proposed by Rahejas were approved by BMC officials without verifying whether the hilly terrain and existing drainage lines supported these plans. The sewagedirections drastically changed no less than five times. In 2010, 2012 and 2015, the Rahejas planned three different uphill routes for drainage and the BMC officials blindly nodded!
The Rahejas claim that DCC issued in Feb 2015 was for joining the sewage into common drainage of the private layout downhill as against a proposal for flowing the drainage directly uphill and out of the layout, submitted in 2012. 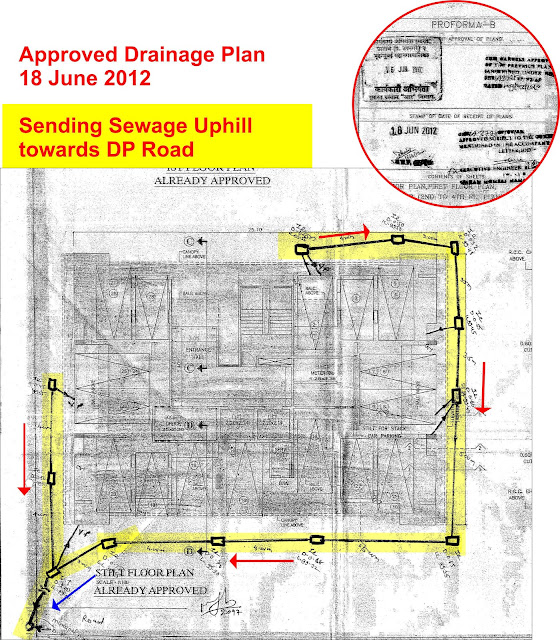 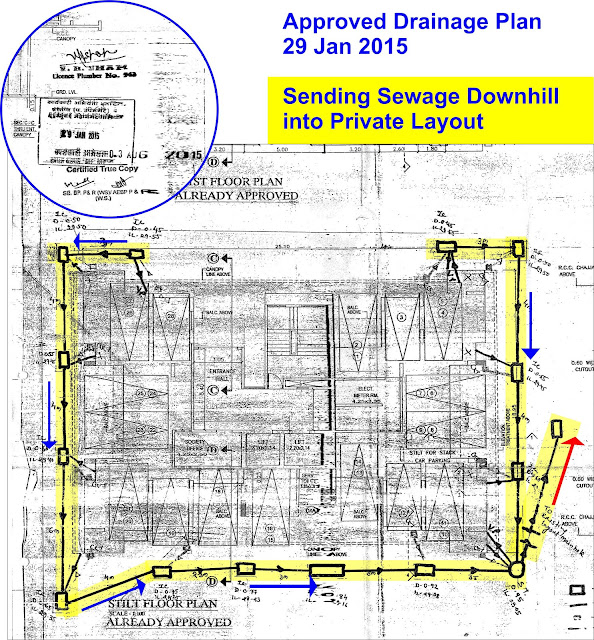 The drainage lines finally laid in December 2015 went uphill to the adjoining DP road (shown below), and joined a municipal sewer outside the neighbouring TCS office building. But this sewage connection (which is not shown in any proposed or approved plan) isn’t working because of improper gradient.
So the Rahejas built a soak-pit to disguise Horizon Green’s lack of proper sewage, in order to sell the flats to unwary buyers.
Although the cover-up failed and the scam is out in the open, a few buyers have already become bakras. They are angry and may soon look for legal remedies against the builder. Indeed, the newly enacted Real Estate Regulatory Authority (RERA) may prove to be the most appropriate forum for challenging Horizon Green’s fraudulently-acquired Occupation Certificate and seeking compensation.
ISSUED IN PUBLIC INTEREST BY
Krishnaraj Rao
9821588114
krish.kkphoto@gmail.comPOSTED IN PUBLIC INTEREST BY
Sulaiman Bhimani
9323642081
citizensjusticeforum@gmail.com Also read: FIR filed against K Raheja builder: Horizon Green Borivali has invalid OC and Fak
(Visited 240 times, 1 visits today)