Skip to content
Mumbai, 27th January, 2017: Justice Chinnasamy Swaminathan Karnan of Culcutta High Court and formerly of Madras High Court, wrote to Prime Minister Narendra Modi urging him to take action against “high corruption at the judiciary”. In his letter dated 23rdJanuary, 2017, Justice CS Karnan furnished the prime minister with “an initial list of corrupt judges”, and in addition, three other officers of Madras High Court, who he implied had detailed knowledge and proof of the corrupt acts of the 20 judges. Justice Karnan asked for all these persons to be “interrogated by the officers of the Central Agencies” – probably referring to Central Bureau of Investigation (CBI).
Justice CS Karnan’s recent writings and actions have confronted India with huge questions and challenges, namely:
a) Is Justice CS Karnan a judge a nutcase – a man with impaired mental functioning? If so, what constitutional safeguards does the nation have to remove him, to prevent him from damaging the reputation and function of the higher judiciary?
b) Alternatively, is Justice CS Karnan a whistleblower revealing rampant corruption in Madras High Court and Supreme Court? If so, what constitutional mechanisms does India have to conduct proper investigation of his allegations?
Read Justice CS Karnan’s letter to the Prime Minister below: 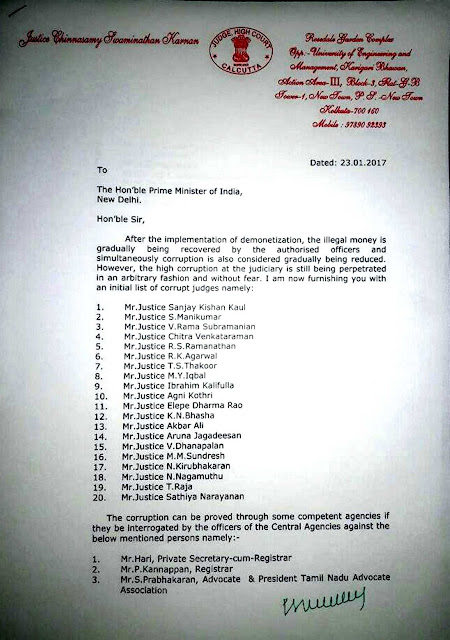 The judges named in this letter are mostly Justice Karnan’s former colleagues, namely:
So, in the light of this letter, let us consider whether Karnan is a raving nutcase that the judiciary is unable to rid itself of. Is justice Karnan a living proof of the fact that there is almost no way of getting rid of a bad or incompetent judge?
Or is Karnan a whistleblower exposing the corruption of Indian judiciary, and deserving of the respect and gratitude of all Indian citizens? And therefore, is he a living proof of the fact that even a High Court judge cannot bring corrupt judges to justice?
The jury is still out on that one.
ISSUED IN PUBLIC INTEREST BY
Krishnaraj Rao
9821588114
krish.kkphoto@gmail.com
(Visited 363 times, 1 visits today)