The reference in this article is to this video circulated on Facebook by the “unofficial” page of Hindutva-heart throb Dr. Subramanian Swamy, which shows “Hindu Vahini volunteers” haranguing the teachers of St. Pious High School in Hyderabad’s Ramnagar area.The video is also linked to an article on the site hinduexistence.org

The bane of contention is the distribution of “Bibles” to school children,with the alleged motive of religious conversion of young children. To quote the site,

Hindu Existence Forum had the tip off of this evangelical programme being made stealthily.

Some of the Hindu Guardians were repeatedly commenting in Hindu Existence. After contacting Hindu Vahini Karyakartas (Volunteers) in Hyderabad, they took the resolution to crack the Conversion and Bible propagation conspiracy being held in Christian Schools. In a speedy operation they thundered over the premises of St. Pious Girls High School and unearthed the evangelical menace in Educational Institute run by the Christian Missionary.” 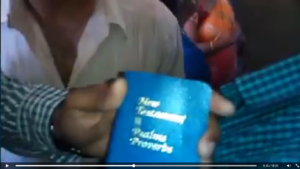 Fig. 1 A screen-grab from the video shows that the boxes contained the Gideons International King James Version

The video itself tells you of the quality of the mob’s discourse – the incessant heckling, the chorus of “Bharat Mata ki Jai” and “Jai Shri Ram” are sufficient to convince anyone of the mob’s credentials. It is laudable that the teachers of the school rushed in to the defense of the nuns and took on the crowd. That it takes about 15 mins (per the video) for one of the school authorities to clearly state their point tells you that the mob was not interested in hearing the school’s version. They accuse the school authorities of toying with the children’s minds, putting thoughts in their heads (translating from the Telugu spoken in the video).

The school teachers’ repeated declaration that no attempts at religious conversion are being made is not sufficient for the mob, one of whose leaders makes the comment about children’s minds being affected by distribution of the “Bibles”. This charge apart, it is crucial to note the reaction when the carton containing the “Bibles” is discovered (about 7-and-half minutes into the video). The first  shout is “dispose”, followed by “Jai Shri Ram”, but the one that follows, which is echoed by a couple of voices is “aa pani manam cheyokku. Bhaiyya political future kharab aavutundi” (We should not do that [dispose]. Bhaiyya’s political future will be spoiled.)

Taking one step back, let us examine the claim that the school’s distributing the “Bibles” is wrong. St. Pious is among those schools and colleges in India which are administered under the provision for Minority Educational Institutions (MEIs), for which a provision is made in Article 30(1) of the Indian Constitution. This status is, however, granted conditionally. As an article on Legal Service India points out:

“A minority institution may impart general secular education; it need not confine itself only to the teaching of minority language, culture or religion. But to be treated as a minority institution, it must be shown that it serves or promotes in some manner the interests of the minority community by promoting its religious tenets, philosophy, culture, language or literature.”

It is thus abundantly clear that the Hindu Vahini is ignorant of the provisions of the Indian Constitution and could perhaps do with a good dose of education that the school offers. As for whether or not the school “converts” children, perhaps that judgment is best left to the parents of the children being taught there. Meanwhile, the issue has already been taken up by the Christian community, as a post on The Gospel Truth Newspaper indicates.

It is alarming, however, to think that any such mob could barge into a school and interrupt proceedings therein. Is any discourse on the content and/or quality of education in India now going to be decided by creating such a ruckus to the accompaniment of shouts of “Jai Shri Ram”?  As Narsing, who shared the video link, commented, these “brand new saviors of culture.. don’t know how to talk to women and teachers.. these rowdies are pointing fingers at them, pushing them.” Which only raises further question on the kind of “culture” that is being encouraged in this country.