Mumbai, 30th August, 2016: To recover its Rs 100 crore project loan to RNA Exotica before it becomes a bad debt like BOI’s loan and SBI’s loan, Axis Bank is pressing the panic-button and threatening flat-buyers to immediately pre-pay large amounts (like Rs 25-50 lakh), forgetting about slab-completion schedules. Axis Bank has recently written strangely worded letters to RNA’s Skyline Construction Co in respect of each and every flat (see specimen), saying that unless the entire remaining amount of the flat’s consideration is remitted to its designated account, RNA Corp will not be allowed to sell the said flat to the name of the buyer. These letters, which are supposedly “No Objection Certificates” for the sale of flats to the purchasers, are being lovingly forwarded by RNA Corp to the individual flat-buyers with a tiny email (see example). Axis Bank’s relayed letter is like holding a gun to the heads of helpless flat-buyers and saying: “Pay everything right now! Or else you will never get your flat!” And RNA Corp’s forwarding email seems to suggest, “Yes, forget about installment payments based on slab-completion schedule. Just pay 100% right now”.

In fact, Axis Bank’s letter has come as a jolt to many buyers who were unaware that their flat was mortgaged by RNA to Axis Bank! Hundreds of RNA Exotica’s buyers are suffering from sleepless nights, trying to figure out what course of action will be in their long-term interest. “Should we just pay the remaining amount to Axis Bank, so that it will release the lien over our flats? Or should we continue to pay in installments according to slab completion stages? Or should we go to Consumer Court? Or Civil Court? Or High Court? Or what?!!!” They are at a loss as to what to do next! 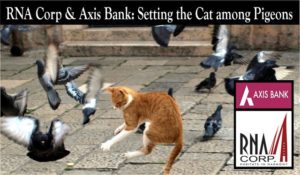 [NOTE: In our earlier article titled How RNA Corp taught ExoticArithmentic to Axis Bank, we revealed how Skyline Construction Co mortgaged unsold flats of RNA Exotica in 2011 and 2013 based on hugely inflated and completely unverifiable figures. Axis Bank gave the builder a Rs 75 cr line of credit in March 2011, and beefed it up to Rs 100 crore in March 2013, although the value of the collateral fell sharply.

Also, in RNA Exotica: Nine ways buyers got screwed, we analyzed the negative implications of the sale-purchase agreement.]

No, this is not really a “No Objection” letter; it is actually an Objection letter from Axis Bank to the flat-buyer with whom it really has no direct connection, and as such, it is illegal. As Axis Bank has given a project loan to the builder and not a home-loan to the buyer, it has no business communicating with the home-buyers.

What is the solution to all this? One possible solution could be that flat buyers should pay this amount to Axis Bank, but only after filing a civil case and after RNA Corp gives an undertaking to the court that they will complete the project within a deadline. Groups of flat-buyers are reportedly planning to take some such step, although these discussions are still at a preliminary stage.

WITH MAJOR INPUTS FROM