The Economic Offences Wing of the Mumbai police have filed an FIR against a leading property developer for allegedly duping over 150 buyers.The complainants have alleged that the directors of RNA Corp and its associates have interminably delayed handing over possession of apartments booked by them at the developer’s project in Kalina in 2010.The buyers claim that they have already paid around 70% of the money for apartments at RNA Address that were priced between Rs 1.5 crore and Rs 3 crore.

The builder, they said, had initially promised them possession in 2014, but has been delaying the handover claiming to have failed to acquire necessary permissions from the BMC. According to the buyers, in March 2013, after completing the third slab, the builder informed them that work would remain suspended until additional approvals were obtained within a few months.Further enquiries over the next couple of years, right until last year, were deflected by the builder, who kept blaming the civic body for taking time to grant approvals. Earlier this year, some of the exasperated buyers made enquiries with bodies such as MHADA and MCGM about the status of the project, and said they were surprised to find that RNA had not made certain payments with respect to the pending approvals.

Pradeep Banerjee, a director at an MNC, who has brought three apartments in the complex, told Mirror that the buyers were tired of RNA’s excuses. “Every time we approach the builder he comes up with some excuse or the other. All promises made by the builder have been proven to be fake.“ Ashish Verma, another buyer, claimed that the police were delaying taking action against the builder. “Earlier the FIR was registered with Kherwadi police, and now EOW has filed the FIR on the same complaint. It’s been four days since the FIR has been registered and no action has been taken. Instead of arresting the accused, the cops are asking for original documents from us.All these are delaying tactics.“ The delay in the handover of the flats, said advocate Ameet Mehta, who is representing the buyers, was severely inconveniencing several of them. “It’s been seven years, and many buyers are senior citizens.“

An EOW official, involved in the investigations, said, “The scam could involve over Rs 100 crore. Statements are being recorded and suitable action will be taken soon.“

Anubhav Agarwal, a director at RNA, said “These are people with malicious intentions. We had moved court also because of such intentions. The delay in the project was due to us not getting permissions on time. The court is yet to pass an order on the same. The case is subjudice. Meanwhile, we can’t understand how the cops can file a case against us. We will challenge the same in court.“ 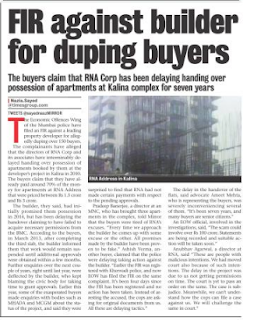