The breeze that began to flow around noon on April 6 had by the evening grown into a heavy storm. Then the hails, the size of mangoes, came pelting down, with rain that lasted until the following evening. When the weather finally calmed down, 55-year-old Chandrakant Ikhe began to count his losses.

“I had no heart to see my farm after this event,” recounts Ikhe, a progressive farmer still to reconcile to his unprecedented loss in those two days. Football size water-melons lay damaged on 16 acres, mauled by the rain of hail, he remembers, countless melons, unfit for consumption, still strewn all over. “See this?” Ikhe says in frustration, lifting a big melon showing cracks and marks, “it’s all a waste.”

Ikhe’s mental anguish is quite stark: There are long pauses between his sentences; he stares desolately at his forlorn farm with rotting ‘sugar-babies’ (sugar-baby is the melon variety he grew) as far as you can see. His crop worth at least Rs 20-25 lakh went to dumps overnight. “You are seeing 350-400 ton (MT) of melons,” he says of the destroyed crop. In a fortnight, it’d have fetched him Rs 5-6000 per MT.

Some melons escaped nature’s fury, he says, but they would fetch paltry price. Ikhe will manage to earn barely Rs 1.5 lakh, or less than ten per cent of his estimated returns. That, he adds, is not even his investment costs. It was for the first time he cultivated melons on a big stretch, he says.

From his returns he planned to renovate his house, marry off his only daughter this year, and invest in a new farm technology. “Now the priority is to fix loans,” he says. The plans, alas, are on the hold.

Farming is a risky profession, but Ikhe’s just learnt it’s also a gamble. “Had it rained a week later, I may not have suffered such a big.” He’s is among a hundred melon growers who suffered big losses in recent hailstorm in this village of Kej Tehsil in Marathwada’s drought-prone Beed district, their loss accentuated by extreme weather events that are occurring at such regularity that farmers like him have no idea how to cope.

Several climate studies point to a sharp rise in extreme weather events in central India, and warn the farmers would be at the receiving end. On the one hand, Marathwada region, of which Beed is a part, is experiencing a continuation of meteorological drought leading to severe water stress; and on the other, sudden climate events like hailstorm in March-April is wrecking irreparable damages to crops.

Sone-Sangvi farmers are not atypical sustenance small or marginal farmers. Most of them grow high-end crops with cutting edge technologies. Their stakes are high, their risks higher.

A few km from Ikhe’s village near Kej town, Waseem Inamdar, 32, is broke too. He shows us around his farm – a picture of devastation. This week, the farm, in the midst of barren land, would have harvested bananas, pomegranates, Kesar mangoes and grapes that had come to harvest, clocking him profits of around Rs 50 lakh, by conservative estimates. Like Ikhe, he too can’t recover his input costs. He spent Rs 20 lakh this year – or almost 40 times the average annual investment that a dry-land cotton farmer of 2-ha land would usually spend on his cotton field in this region to earn Rs 10-20,000/acre. That was mostly on drip sets, digging a few bore-wells, and fertilisers and other inputs. Inamdar’s investment and losses like that of Sone-Sangvi farmers would make a small farmer in Marathwada mighty nervous. 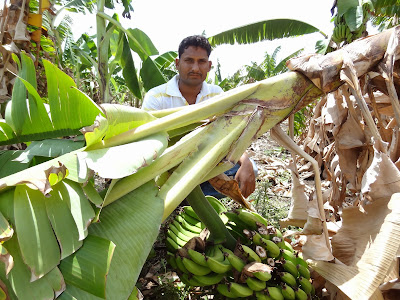 “It was the third and final blow,” Inamdar says showing a banana tree that caved in with the bunch of green bananas that now look like rotting. The first bout of incessant rain came in March first week; then in March end, but the third one on April 6 and 7 came with such strong winds and hails that nothing was left to be salvaged. “Last year too I had suffered damages, but this year’s losses are irrecoverable.”

Inamdar runs a brick kiln and agriculture implements shop. From the profits he made in that business, he bought 53 acres of arid farmland near Kej and developed it into a horticulture farm by putting in big money, in five years. He first developed a banana orchard; then grapes; on a plot of five acres stand the mango plants of exportable Kesar variety, and there are pomegranates too over a six acre plot.

What happened to Ikhe or Inamdar is symbolic of wide-spread damages to crops just before the harvest. In Punjab, Haryana, Uttar Pradesh, the incessant rains wrecked standing wheat and paddy; in states like Madhya Pradesh; Maharashtra; Telangana, it flattened coarse cereals, oilseeds, potatoes and fruits such as mangoes, bananas and melons. Neither farmers nor government has an idea how to prepare for such a risk. The crop insurance schemes help companies, not farmers, says Ashok Gite, a retired agriculture assistant in Beed’s Salegaon village, seven km from Ikhe’s village. “We need a good insurance policy.”

The climatic aberrations are also threatening economies of regions. Kej Taluka, which derives its name from Kejdi River, provides a green contrast to the large swathes of an arid and dreary Beed, among the driest districts in Maharashtra and part of what is called the rain-shadow zone. That’s because of a dam that came up at the confluence of Manjra and Kejdi rivers, where Sone-Sangvi village once breathed.

In the mid-80s villagers were removed to a new place. Many migrated to Mumbai, Pune or Aurangabad for work. Those like Ikhe, who stayed put, slowly transformed their new farm-lands. The once dry-land farmers switched to growing sugarcane following on the footsteps of their prosperous counterparts in western Maharashtra when sugar mills proliferated around the dam.

Empirical data shows, average annual rainfall in Beed district is less than 600 mm and the number of rainy days, much less than most other regions. In last five years the district has received less than 50 per cent of its annual average rains. Yet (and here’s the root of the problem), Beed grows millions of tonnes of water-guzzling sugarcane to feed about 20 roaring sugar-mills that formed the late Gopinath Munde and late Vilasrao Deshmukh’s political and business empires. The mills are now staring at closure as the acute water-scarcity has begun to finally hit sugarcane cultivation. Neighbouring Osmanabad and Latur districts are also facing drought this year deepening the water crisis to unprecedented levels.

“If I recollect my childhood, I only remember poverty,” remarks Babruvan Kanse, a progressive farmer in Sone-Sangvi who leads a collective of about a hundred horticulturists including Ikhe. Kanse was first in his village to actually experiment with watermelon cultivation on his farm in 2004 and motivate others to switch to this short-duration fruit from the otherwise water-guzzling sugarcane.

Lack of water, stemming from years of poor monsoon, had already prompted the peasants to look for viable alternatives to sugarcane. Kanse grew watermelons on drip – it required less water and traders came to doorsteps to buy the produce. Melon is a short duration crop. You sow the seeds on the rows of soil beds (some use mulching paper sheets to hold moisture and reduce water use) in January and reap the harvest by mid-April. The yield per acre here stands at 25 MT. At an average Rs 5-6000 per MT (Rs 5-6 a kg), the per-acre returns could be an average Rs 1.25 lakh over just three-four months.“You make a one-time capital investment on drip sets and a recurring production expenses on seeds and fertilisers and chemicals, and yet you can make good money from this crop,” Kanse explains.

So the shift was swift. Where this village had 150 hectares under sugarcane in the 2001-2002 season it now grows soybeans and pulses in kharif and water-melons in winter. They adopted new technologies – like automated and semi-automated drip sets; mulching papers to increase water efficiency; in-situ water conservation tanks; some have built expensive green poly-houses to grow high-end vegetables such as capsicum – by pledging huge investments from whatever profits they made every year.

“Weather is a new problem,” Kanse says. It barely rains during the monsoon, affecting kharif; then in February-April, sudden hailstorm events wreck the Rabi crop. Water brought him economic prosperity, Kanse says, his new problems are driven by the lack of it. 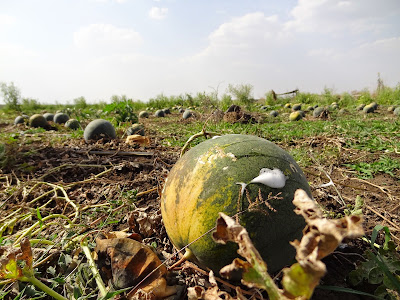 Ikhe’s 16-acre farm is in the belly of Manjra dam reservoir; sans water this time. This used to be his farm that got ceded for the dam. Some Sone-Sangvi villagers farm in the catchment when water recedes. Many have dug bore-wells in the belly and laid pipes from far away water-sources, desperate for water. If it rained, this area would be under water, Ikhe says. For many years now, it has not rained and the dam never got filled to its capacity even once this past decade. It’s a common refrain in this part.

Ikhe says he dug an open well and several bore-wells on his 16-acre farm in the catchment of the dam when the reservoir dried up. If you stretch his drip pipes end to end, he calculates, they would run 8 km long. Place a water melon every foot, he says, and you will end up counting hundreds. That’s how many have gone waste, he laments. On his five-acre near his new village, there’s nothing growing.

Until last year, he grew vegetables, potatoes, sugarcane and even water-melons there – by way of drip-irrigation. He has, like many other farmers in this belt, a semi-automated drip-set. “You set the time and quantity of water to be used; different for different crops and you can single-handedly operate the entire 50-acre stretch with this machine,” Ikhe says. “We can adopt any technology,” Ikhe says, staring at his melon farm, “how do we conquer weather?”

4 thoughts on “A hailstorm of worries”