Here is what is going on with the fake article about emotional distress helplines that Free Press Journal. There are mixed messages galore.

After some attempt to fob off the fake reporting as the helplines giving quotes and then denying later, the reporter admitted that she had no proof of the interviews whatsoever. And it isn’t just about the content of the interviews, she doesn’t even have proof of contacting the helplines for quotes at all. Instead, they are asking for confidential call records of the helpline that would jeopardize the confidentiality of thousands of callers. One really has to wonder at the need for this needle and haystack process. If the reporter knows the time of call and number she called from, the records for that number will have the call. What is the point in demanding a vast swathe of helpline numbers as though the reporter doesn’t know her own number?

The journalist did admit that she did not have any evidence of having asked for a quote from anyone in that article as per Paras Sharma. Yet the editors continue to call it a case where either party could be lying.

This is fairly serious, but astonishingly, the organization has gone into a cover up mode with bizarre replies from editors ranging from “she is young and just beginning her career” to “neither of you can prove”. The article itself has been taken down from the website. However the iCall wants a formal retraction in print as well as at the url of the missing article, as the allegations of the article raise a doubt on their professionalism, not to mention creating a perception among readers that their anonymity may not be safe with helplines and thus prevent people from seeking help. This, the Free Press Journal refuses to retract its story.

Paras Sharma of iCall helpline is understandably livid. He insists that if the article was published in the print edition, a retraction in the print edition is required. After the evasions and denials and cover ups, even an admission of not having any evidence at all of having interviewed is being termed as having no proof that the article was fake. He intends to approach the Press Council in this matter as well as The Hoot, and will continue to press for a retraction.

I am perplexed by this seemingly adamant refusal to uphold journalistic standards by retracting reports that get proved unreliable. Is the Free Press Journal seriously saying that it does not retract articles known to be false for the sake of sympathy for the person who faked it? What is the integrity of the publication and why should anyone buy it? One wonders if it is indeed a junior reporter who made up the false story, or is she being shoved under the bus to protect some liar with power in the organization? I truly cannot imagine a news publishing organization trading its reputation for a new recruit. Should I downgrade my already low opinion of news “outlets” further?

Here is the latest email I received from Paras. I have not been in touch with anyone from the Free Press Journal.

As you can see, I have been quoted in this story in my professional capacity. Now what is the problem with this story, you ask? Well, the reporter never contacted me for any such story.

The whole quote, along with all the stats are completely made up. What’s more, the other helpline which has been quoted in the story – Aasra, has also said that the reporter never called him up for the story. The three case studies as it stands, are absolutely fake.

I have written to the Editorial board and went through the entire hierarchy going from the DGM – Mr. TGP Krishnan, the city editor Mr. Anil Singh, right to the Editor-in-Chief Mr. Shailender Dhawan.

The paper was initially apologetic and cooperative. They took down the story from the website and as you can see now the page throws a 404 http://freepressjournal.in/helplines-flooded-with-desperate-calls-before-v-day/

After relentless pressure from my end, and after you wrote about this, the journalist personally wrote to me apologizing for her story and even admitting that she has no proof for her story!

We said that since our organization had been quoted publicly, a private takedown of the story and an email apology shall not suffice. Despite repeated assurances, the editor-in-chief today has refused to print a retraction saying that we have not provided clinching proof that the story was fake.

He essentially says that its our word against his reporter and if we question their journalistic ethics, they will question our ethics saying that we dont respect client confidentiality and freely share the information with the media.

He has told me ‘Don’t waste my time’ and that ‘I should pursue the matter in any way I deem fit’.

Some more facts in conjunction to this case:

While we are contemplating our future course of action, I would appreciate any support/guidance you can offer in fighting this unethical newspaper.

Update: The Free Press Journal did publish an apology and retraction on their front page. 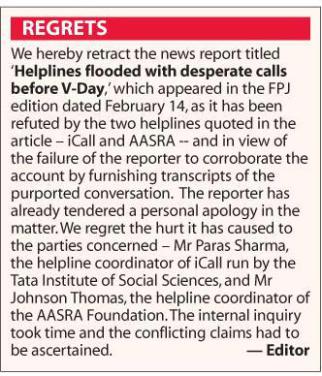