CIC Ratnakar Gaikwad: “For MMRDA’s Corruption when I was chief, Buck doesn’t stop with me!”

12 June 2012, Mumbai. At 4.30 yesterday afternoon, six RTI activists who opposed Ratnakar Gaikwad’s selection as Maharashtra Chief Information Commissioner met him to discuss documentary evidence of their allegations against him. The meeting – a follow-up to Mr Gaikwad’s challenge to back their allegations with documents – was attended by half a dozen journalists. The activists were G R Vora, Anil Galgali, Sulaiman Bhimani, Mohammad Afzal, Kamlakar Shenoy and Krishnaraj Rao. 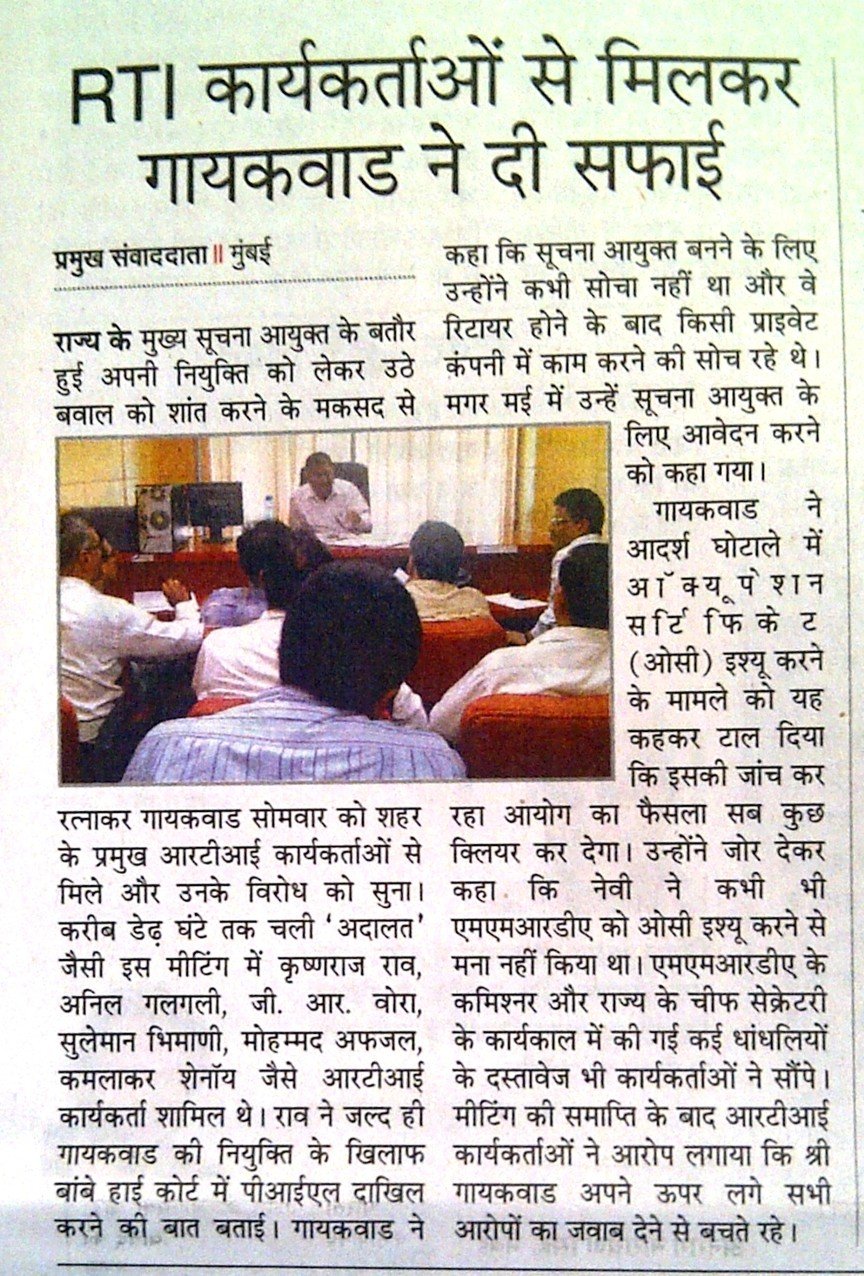 The focus of the meeting was sit across the table and seek explanations for many RTI documents about Adarsh and other scams that happened during his tenure as Metropolitan Commissioner of MMRDA. However, Ratnakar Gaikwad did not look at any document, and dwelt on generalities such as, “I am a bona fide person, and not even my worst enemies will say that I have ever acted mala fidely in any matter. You can ask any ten honest officers of your choice their opinion about me, they will all vouch for my honesty. Every file at MMRDA was not placed on my table. Many other IAS officers were responsible.” The activists were left feeling frustrated by his unwillingness to read the documents and take responsibility.

The activists, who had sought the appointment with him, made it clear at the outset that unlike the groups of RTI activists who had met him earlier that day to welcome him, they opposed his selection as Information Commissioner. Their objections were:

1.       NO ONE SHOULD BE A JUDGE IN HIS OWN CAUSE. Ratnakar Gaikwad was earlier the Chief Secretary, which is the highest post in Mantralaya. He was also Metropolitan Commissioner of MMRDA (Mumbai Metropolitan Region Development Authority). At that time, he may have been responsible for non-disclosure of many documents, or at least had a stake in documents not being given to RTI activist. And now, as Chief Information Commissioner, Ratnakar Gaikwad is the person responsible for hearing cases against various departments of Mantralaya and against MMRDA. This violates a key principle of natural justice, and makes Mr Gaikwad, who was clearly an interested party, a judge in his own cause.

2.       VIOLATION OF COOLING-OFF PERIOD PRINCIPLE. To avoid conflict of interest, a cooling-off period of at least a couple of years is stipulated for such postings in government. For example, a government employee of any department cannot be appointed as an auditor of that department. Violating this crucial principle, Ratnakar Gaikwad was appointed to his present  position, where he is to hear and pass orders on second appeals concerning Mantralaya, one week after his retirement from Mantralaya.

[GAIKWAD’S REBUTTAL: Ratnakar Gaikwad held stoutly to his position that he was not solely responsible for the security implications of the building. “The Adarsh file passed through me at several stages, and the credentials of all the IAS officers concerned, including Jairaj Phatak, are impeccable and without taint. As for security concerns about Adarsh being near the naval defence installations — security was the job of the police, and not my job,” he argued. “The Navy’s letter was addressed to the State Government, and not directly addressed to me. Also, had the Navy directly asked me not to issue the OC, I would not have done so. But they only asked for information about the occupants of the individual flats of Adarsh building, and they did not mention the security concerns. (PS: We actually read out the portions of the Navy’s letter that stressed the security threat in almost every paragraph, and repeatedly urged the government not to issue the OC pending clearance by the Navy. But Gaikwad was adamant, and insisted that he was never aware that Adarsh was a security threat.)]

5.       SCANDALS AT MMRDA DURING HIS TENURE. We placed various documents (both issued and accepted by MMRDA during his tenure as Metropolitan Commissioner) on the table before Ratnakar Gaikwad. They were obviously defective documents that should have resulted in immediate action against the persons concerned, as such as blank permissions with no dates etc. In one instance, a contract worth many crores of rupees was awarded to a spurious construction company with a net worth of only two lakh rupees and no commercial activities on its books, and its financial status is obvious from the website. Complaints were addressed to him when he was at MMRDA — both hard copies and emails. However, he had never even acknowledged them then, and he refused to look at them now.

At this meeting, he asserted he had never seen any complaint from Sulaiman Bhimani against RNA Builders, Grace Developers or any other party before. Bhimani and Krishnaraj Rao kept putting documents like  contracts and permissions on his table, but Ratnakar Gaikwad did not seek to read even one of them. Perfunctorily turning a couple of pages thrust at him, he insisted that even if he was head of MMRDA when these contracts and permissions were awarded, he was not the person responsible. “If there is anything wrong, you should seek action by complaining to the proper authorities or going to court”, he concluded before getting up and retreating to his private chamber. All our attempts to fix responsibility for oversight and due-diligence, and due processes were frustrated as he kept turning the discussion to one point that can be paraphrased as: “I am a good man, and I never done any wrong. If there were wrongdoings at Mantralaya and MMRDA even during my tenure, I don’t know about them, I was not informed and maybe, if such things happened, other people are responsible.”

The activists were left scratching their heads and wondering: if the head of a public authority does not take responsibility for the blatant wrongdoings and corruption that happen there during his tenure, who is to be held responsible? If the buck does not stop at the top person in an organization, where does it stop?

BOTTOMLINE: Gandhiji’s three monkeys that say, “See no evil, hear no evil and speak no evil”.