The residents of the Akash Horizon Premises Cooperative Society Limited, located bang opposite Western Railway’s (WR) car shed at Mumbai Central (east side), have complained about constant air and noise pollution, they are suffering for nearly one decade, due to the work of maintenance of trains, in the car shed adjacent to their building.

The testing, recharging and maintenance of Rajdhani. Shatabdi and Duronto trains is done in the open shed, touching the compound wall of the Aakash building. While shunting of coaches/locomotives and testing of power cars generates a lot of noise, a lot of smoke is emanated by the diesel generators, which straightway flows in the flats of the residents. The generators also cause vibration, due to which the compound wall of the building was  collapsed some time back.

The work also causes financial loss to the railways since it has been using outdated technology. The testing can be done through less expensive electric power generators, as against age-old diesel operated generators. The diesel is much more expensive, Sulaiman Bhimani, President, Citizen Justice Forum said.

Mirza Baig, Hon Gen Secretary of the society, who has been following up the matter with WR since long, in a letter dated 5 December 2017, to Divisional Railway Manager (DRM), has pointed out that the railways recharge generators day in and day out causing considerable amount of noise and sound pollution.

The 19 story building accommodates over 1000 people, most of whom are senior citizens. The work goes on till 4 AM disturbing peace in the area, Baig has stated requesting WR to take corrective step to stop this nuisance. The “Equinox Labs” in its report dated 17 March 2016, had stated that the noise level in the shed was 94.4 decibels as against specified limit of 55 decibels. If the railways fail to take corrective action, then we will be left with no option but to approach the court, Baig said.

Additionally, BMC’s Nair Hospital, catering to lakhs of patients, which is in close proximity of the yard, and thousands of residents in the neighbourhood also has to bear the noise and air pollution emanating from the yard.

Earlier, in response to a query under RTI by the resident Laeek Chunawala, ADME (BCT), WR vide letter dated 31 December 2015, had admitted that the department had not obtained any NOC for the work. Similarly DEE/RS/BCT vide letter dated 7 January 2016 had stated that the EMU shed is for day to day maintenance of EMU rakes and is not covered under Factories Act 1948.

Way back in 2009, the then WR GM R N Verma, in a letter dated 4 December 2009 to former MP and Minister Milind Deora, had stated that the rescheduling of the work of testing power cars has been done so that the residents are list disturbed. But of no avail.

Under article 21 of constitution of India, every citizen has right to live in clean and peaceful environment and it is the responsibility of state to provide it. It is expected of Railway Minister Piyush Goyal to give relief to citizens, who include senior citizens, women and children, Bhimani said. There was no response to detailed email seeking clarification sent to WR DRM. 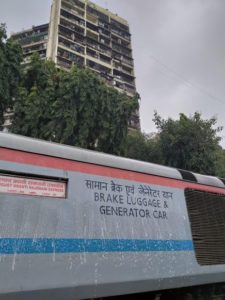 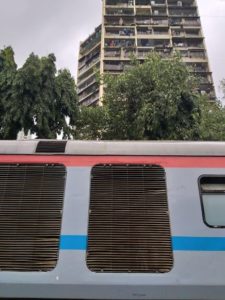 Gap and distance between compound wall of Akash Apt. and train which are brought for maintenance 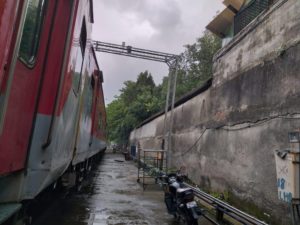