Yeah, I know this is a departure from my normal ways, but I think it is justified. We obey laws in return for protection. If protection is missing, then blindly adhering to laws is not going to help.

Here are some numbers from NCRB records 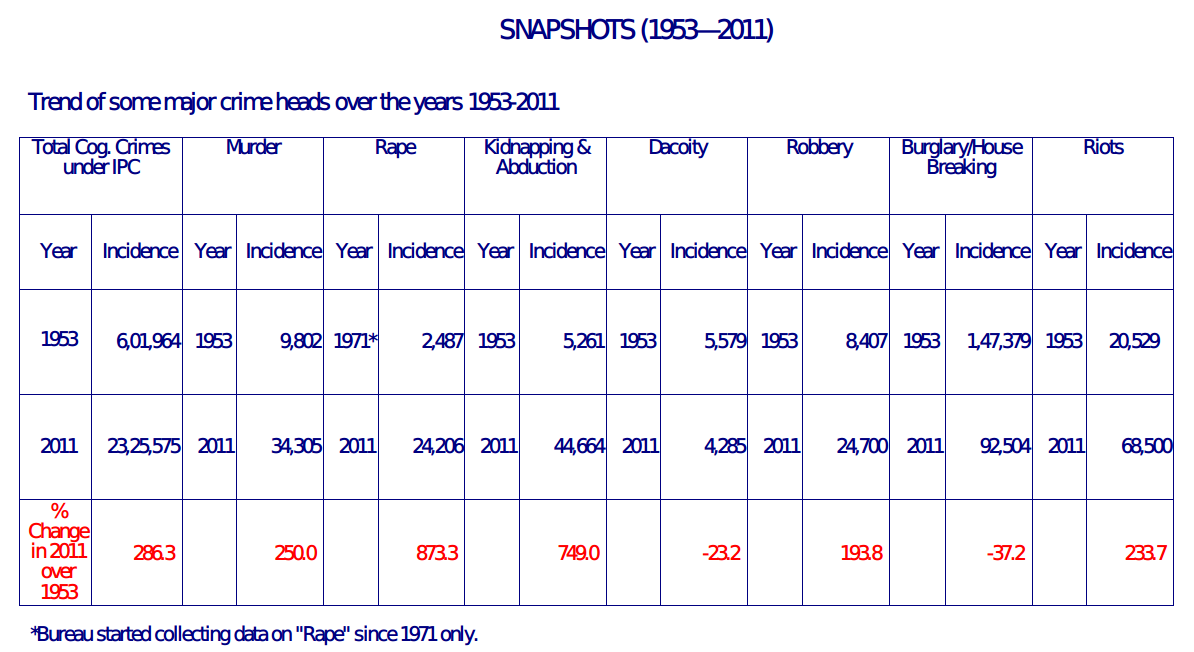 It is clear that Rape has grown the fastest. And this is growth not from 1953, but 1971 – as opposed to 1953 for the others. The next is kidnapping and whatever else comes after that has grown less than a third of the numbers for rape. This doesn’t count other crimes against women. If we see the kidnapping crime details, women far outnumber men there too. 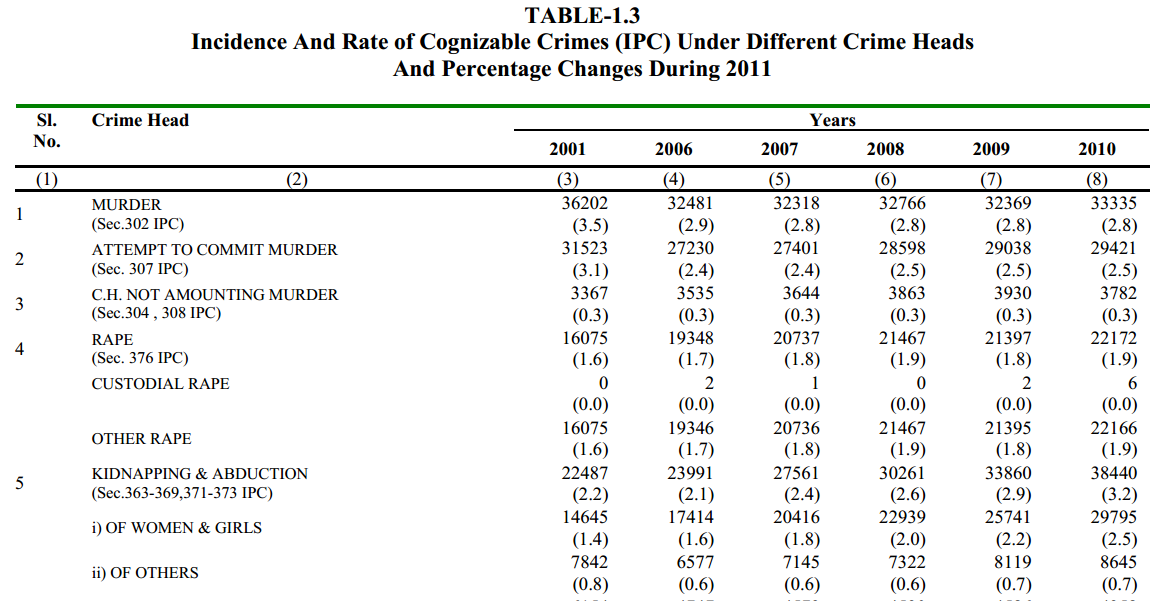 The bottom line is clear. Waiting for law and order to work does not work. now they are planning yet another law. But in a country where authority figures seem to think that women can’t get raped without their will, or that provocative clothing, food, pubs or tinted glass rather than criminals are the cause for rape, one new law to add to the existing ones can’t do much. You have politicians accused of rapes and police issuing statements on women staying home rather than doing their jobs.

This is a country where sex with a girl under 16 is not rape is she is your wife. As a bonus, you get to be her legal guardian while she can’t legally buy so much as a phone to call for help or have an independent bank account. Marital rape is not rape. Refusing sex to the husband is torture. Not even deprivation or denial, but torture. Police talk of rape victims as prostitutes and show sympathy to innocent boys who went a little wrong. Politicians are busy looking stupider than the other, while parties are busy outraging over misogyny by other parties and studiously ignoring their own. What women’s rights can you expect from this three ring circus?

The massive outrage against crimes against women has not led to a single thing that will actually prevent rapes. The number of rapes in media continues unabated, there are no reports of rapes prevented and anti-rape protesters are attacked using state machinery , while some leaders avoid showing their faces and others try to become the faces of wronged innocence.

Enough is enough. Time for the state to sanction mob justice of predators of women citizens. Mobs must thrash criminals till they beg at the feet of their victims before hauling off to police stations. Such mobs must actually be able to apply for police protection to prevent being attacked by supporters of crime while they thrash them.

Women must click photos of people harassing them. Groups should organize stings with young, seemingly alone women as bait. Then thrash whoever hassles them. Drag to police station. The problem of police not filing cases will be solved automatically too. Is that entrapment? Sure. I figure if it is good for terrorists and drug dealers, it is surely justified in such a so far unstoppable crisis.

Violation must be returned with violation by society itself. Use phone cameras to prove cause. Record victim naming criminal and what he did for submitting to police. Then thrash (rules below). Sample scenarios.

Is this illegal? Yes. Will it work? Likely better than anything the government has reluctantly tried so far. The bar trashed by the NCP women is not going to serve a drink like “balatkaari” (rapist) in a hurry.

Also, it is worth petitioning the government and courts to make these mobs legal provided adequate proof of crime and identification of criminal by victim or witness. Considering that they have failed spectacularly at curbing crimes against women, I fail to see what moral authority they have to refuse.

Further, citizens can offer to voluntarily cease these activities once the system can prove that it has started keeping women safe. In India, mobs write policy. I think this will be very good motivation for the government to finally start looking at women’s rights with a view to getting results.

Is it possible for innocents to be harmed? Yes it is. However, someone wanting to harm innocents already has many ways too. This will not be a unique opportunity without which they would remain upright citizens. Also, with a rape happening every 22 minutes, far more going unreported, molestations happening all the time, most of them not reported, domestic violence on the rise…. I dare say it will prevent far more innocents being wronged than perpetrate.

Your ideas in the comments please.

3 thoughts on “Mob justice against Violence Against Women”