I am a fairly heavy smoker, and have been wanting to quit smoking for a long time. I quit easily enough, but I enjoy smoking too, and end up right back later. I had earlier tried shifting to electronic cigarettes, but it didn’t work. Then, I got a better electronic cigarette from Smokefree, and it worked. Sharing what I learned, in case it is useful to anyone else. A lot of this information can be found on the Wikipedia page, which is a good starting point for references to read for further information.

What are electronic cigarettes?

Electronic cigarettes are vaporizers, that use batteries to heat liquid and form thick vapor that can be inhaled like cigarette smoke.

How safe are they?

It is not known. They are a fairly new product, only a few years old, so there is little research and no long term research. However, the general consensus seems to be that in comparison with cigarettes, they are far safer. The main base is propylene-glycol, which is already used for delivering inhaled medications. Since there is no smoke or combustion involved, any risks associated with that are gone. Some research indicates that cartridges may not be as safe as tank atomizers. Also good idea to investigate contents of liquid if you are very health conscious. While all ingredients are food grade, there is of course, no research on “inhale grade”.

That said, a doctor friend was blunt. “It is much better than smoking.”

How expensive are they?

The premium kit I am using comes for a thousand rupees at Smokefree. I would suggest buy spares. Either buy two kits or buy spare tank atomizer [don’t buy cartridge ones – I found the frequent refilling and cleaning enough to send me back to regular cigarettes] and battery at least and a few different flavors of liquid, so that you don’t end up shifting to vaping only to return to a cigarette because your electronic cigarette ran out of battery or fluid, etc. Spare battery is a must at the least for any serious plan to quit smoking permanently. Though I guess it doesn’t matter if you aren’t quitting cigarettes and can always have a smoke.

I would say a good initial investment to make would be around Rs.2,500/- This looks fairly expensive, but if you are spending a hundred rupees on cigarettes a day, it is the equivalent of less than a month’s smokes. This purchase should be good for months. After which, the expected expense is a few hundred rupees when you run out of liquid. In the long run, it works out extremely cheap, but if you are buying to try, then it is expensive. In that case, you should try disposable ones.

How will the satisfaction from a cigarette be duplicated?

The vapor from the e-cigarette feels very similar to smoke, and if you are using a liquid with nicotine, you get the nicotine hit that you normally get with a cigarette. In my experience, the tank atomizer and a larger e-cigarette works better for this satisfaction than a slim one that looks like a cigarette. I have used several brands and find that the ones that look like cigarettes may seem more likely to replace cigarettes to beginners, but they do not deliver the kind of experience that will replace the satisfaction of smoking. In the end, if you smoke, it isn’t because you like how it looks.

What kind of side effects should be expected?

I have quit several times, and shifted to electronic cigarettes several times. In my experience, the side effects were the same. A day after quitting cigarettes, I usually get a cough that lasts for several days – in either case. Additionally, I found that I get more thirsty with electronic cigarettes. I didn’t experience any other symptoms. I didn’t get any symptoms other than feeling more thirsty than usual from the cigarettes. However, your mileage may vary. I have not heard of anyone get any dangerous side effects, so if you feel anything alarming at all, it might be good to check with a doctor.

What are the risks to others from the passive smoke?

There isn’t any smoke at all. There is no evidence of danger to anyone else.

Can I use it to quit completely?

Sure. Many people seem to. I find that my habits around smoking having changed, I end up vaping less often than I smoke. I have two electronic cigarettes and I alternate between the one with nicotine and without normally.

Any advice on how to shift from cigarettes to electronic cigarettes? 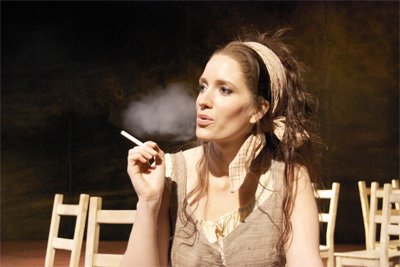 Buy several flavors of liquid. Test-smoke them when you get them, and fill your favorite for when you do the shift. Then, simply run out of cigarettes and don’t buy any. When you want to have a smoke, use your electronic cigarette. Initially, it can be disorienting, as if you are a regular smoker, you automatically reach for cigarette and to light it, etc. So you keep realizing there is nothing to light and it is more like picking a pen on and off and sucking on it – and getting smoke, not to worry :p

If you don’t have cigarettes at all, you will not “automatically” light one, and the new habit forms faster.