19th June, 2016: Welcome to RNA Exotica, a premium building project by Skyline Construction Co, owned by Saranga Anil Aggarwal, where deadlines keep slipping and the number of flats to be constructed keeps shrinking year after year. The number of flats to be constructed has dropped by at least 80 since the March 2011, and the project completion date has slipped by six years. Further shrinkages may lie ahead, and slippages in possession date are definitely forecast. Also, visible manipulation of facts and figures in official documents should make investors sit up and wonder what is going on behind the scenes. 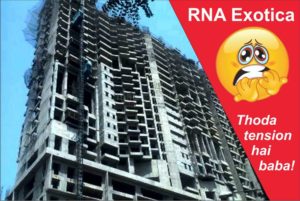 The gory details:
(Deep gratitude and appreciation to Sulaiman Bhimani (9323642081) for tracking this case over the past six years, digging up documents and interviewing sources.)
ISSUED IN PUBLIC INTEREST BY