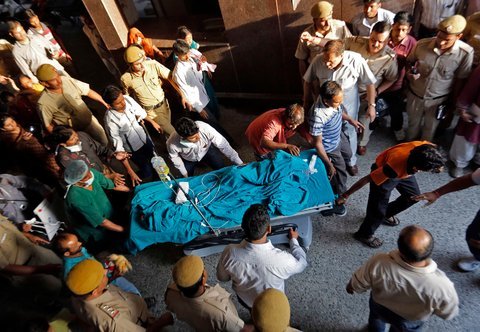 India Ink reported a follow up story of the child rape that shook Delhi in the wake of the gang rape of a medical student in a bus. The article, a thoughtful and responsible action of a reporter, who remembered the girl well after all of us had moved on is a tragic mix of a horror story, apathy of powers that be, exploitation at the hands of the media and an exceptionally inhuman society.

There is a part of me that becomes a raving lunatic at the thought of a child being brutalized. That part is in the driving seat right now. I make no guarantees on the coherence of this post, but I damn well hope I give words to many things you want to say too. I am going to quote from that article here. The parts I want to talk about.

“The passage for the stool would leak every half an hour,” said Gudiya’s mother, a wiry woman in her mid-20s, who wore a blue and yellow sari and had shabbily tied her hair into a bun.

The surgery was a success. Gudiya, seeing that she no longer needed a colostomy bag, pointed to her stomach and screamed in glee, “Papa, everything has gone inside!”

The resilience of childhood brings me to my knees in grateful astonishment. I am glad children recover so fast, because the world sure doesn’t treat them well. That a child can find something cool about everything having gone inside again about a recovery from a brutal rape and being found two days later with extensive damage and objects still inside her is a miracle, and I hope that miracle holds. And I’m hoping enough of you feel like this that we can find a way to increase the chances of it being so.

This is a family already denied assistance when they needed it the most, remember.

After her father received the alarming call from his wife, he and his brother rushed home and looked for Gudiya. They went to the local police station. Dharmpal Singh, the officer in charge, shooed him away, according to Gudiya’s father. “Go and look for her yourself. Inform us if you find her,” Gudiya’s father recalled the police officer telling him.

Four days after Gudiya was admitted to the hospital, her parents went to meet Sheila Dikshit, the chief minister of Delhi. Ms. Dikshit met Gudiya’s parents but left them with cold, callous words. “There are so many rape cases every day in Delhi. How many can I take care of?” her father recalled Ms. Dikshit telling them.

And the world has compounded it with its careless cruelty.

The police said the two men confessed to raping the girl, saying that Mr. Sah had stepped out of his room when he saw the 5-year-old playing outside. The police said he then offered her potato chips and lured her into his room, promising more. The child followed Mr. Sah into the room.

While Gudiya was being treated at the hospital, her father moved out of his rented Gandhi Nagar home and moved in with his younger brother in a distant neighborhood of Delhi. He couldn’t bear the callous and caustic barbs of his neighbors.

“People said that my daughter was greedy and that’s why she could be lured with a packet of chips,” he recalled.

A neighbourhood that forces a family to relocate with cruel remarks that blame a 5 year old for being brutally raped and left for dead is one I honestly hope burns in one of those ugly fires that flare up for no particular reason. Such people deserve to die. Or better still, be brutalized by things they cannot control when they innocently expect something normal. Call me a bitch. That is what I think.

It is hardly greed for a child to go anywhere on being invited or accept a treat from an adult offering it. She hardly went peeping into homes asking for treats. And even if she did, it does not excuse a rape in any way.

There is no such thing as asking to be raped. This child was callously harmed a second time by those around her. There is no excuse for such inhumanity.

After Gudiya’s initial treatment, the Delhi government’s Child Welfare Committee decided that as the girl needed several surgeries, she needed to live in a hygienic place. On April 20, the Young Women’s Christian Association in New Delhi offered free boarding and lodging to Gudiya, her mother and her infant brother. Her father couldn’t live there, as the hostel is meant only for women.

The YWCA hostel in central Delhi is a multistory building, but Gudiya, her brother, and her mother were restricted to their room. “I was asked to not go out of the first floor room allotted to us,” she said. The food on offer was very little, according to the young mother. “I gave my breakfast to the kids and ate my first meal when lunch was served,” she said.

They shared a common toilet with 12 other girls who were survivors of sexual abuse, but Gudiya’s mother said she was forced to clean the toilet twice a day because of Gudiya’s condition. “They said, ‘Your daughter keeps [expletive] all the time and that’s why you should clean up.’ ” YWCA administration did not respond to repeated requests for comment.

Keep in mind, the state was doing no favors by helping this girl. Their rot was part of why she was in this state to begin with. Who knows how much damage could have been saved simply by the police arriving promptly and being visible in the locality instead of ignoring the complaint?

The brothers had been pursuing the police case, running between hospitals. Their meager savings were drying up. Her uncle sent his family back home to ease the pressure of feeding a larger unit in an expensive city.

“We all could not afford to live together, especially when both bhaiya and me have not been working for the last three months,” her uncle said, using the Hindi word for “older brother.”

On July 16, Gudiya was discharged from the hospital. Indian laws had nothing to offer by way of support for her rehabilitation. The family spent a few weeks in a relative’s one-room house until they could find a new place to live. They couldn’t return to their village, as scores of television crews had landed there after the incident.

“My elder brother has stopped talking to me. He blames me for not being able to control my daughter,” Gudiya’s mother said. “Everyone there knows what happened to my daughter.”

They sought refuge in the gift of anonymity Delhi provided. Gudiya’s father moved his family to a lower-middle class area on the outskirts of Delhi, where he began a new life as a vegetable vendor. “They wanted to move away from all those who knew what happened to Gudiya,” her uncle said.

This is a family that clearly is facing hardship for caring for their child. Living in a city is not cheap, and a bloodthirsty media has yet again done what it does best – advertising a rape without care as long as they don’t print the girls name on paper. As if a person in Kerala knowing the girl’s real name would make the slightest difference when the entire village who know her and can hurt her with their discrimination has been told live by numerous crews.

The treatment this family has received makes my blood boil, and I don’t think some of these things still can’t be fixed.

Here is what we need to make their lives possibly better:

Do you have more/better ideas?

Please post links to any coverage you can find that appears to have gone and met real people related with this girl’s family, neighbourhood, village, etc. beyond the immediate family and friends attending to her in hospital, who obviously knew.