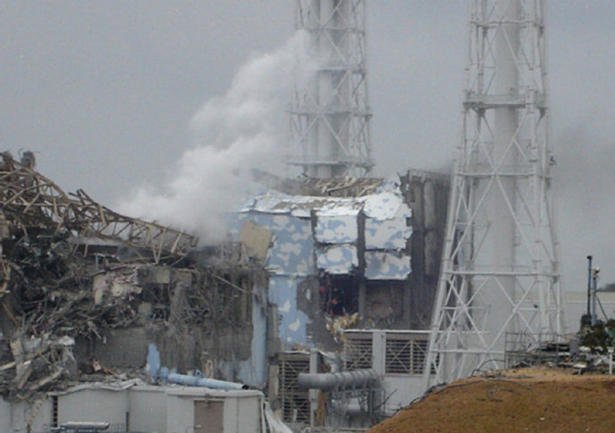 Actually, I am no authority to  be issuing updates, so I hope you guys see this for what it is. I am sharing what I am finding out from my anxious attention. I am not an authority, I am not even a newspaper. I am following the crisis in Japan, the rescue operations and the resultant nuclear emergency, because Nuclear power debate in India is rising as well, and events like this have the potential to change the entire nuclear landscape here.

First, let me say that my fears about the spent fuel were unfounded. Newer and more clear informaiton indicates that while the buildings housing Reactors 1, 3 and 4 did blow up, the spent fuel itself did not blow up, or get uncovered, as the lighter hydrogen mostly floated to the top of the containment structure before blowing up apparently, or at least, we know that the rods in reactor 3 have critically low levels of water, which means that they are where they should be, and that they didn’t blow up into the sky to rain radiation on all of us. Good to know, because that is MASSIVE amounts of radioactive material. Though no one knows exactly how reliable all this is.

Washington Post also has a good graphic, but I didn’t use it, because I’d have to pay. I asked. Its a nice graphic, but the reason I wanted to show it is that it clearly shows how the spent fuel was exposed t air in Reactor 4, but still covered in the others. Whoever is interested may want to head over and see for yourself.

The graph below is from Brave New Climate, and links to their site. I don’t know about the status of using this, am in the process of asking. Will probably design some nice and useful graphic myself later in the day, just so that we don’t feel left behind in the information race. Though the data is so evident at this time, I don’t know what details I’ll put into it that aren’t obvious already.

The reactors seem to be somewhat under control since last evening, shifting the crisis to the spent fuel rods. I am ashamed to say that while the whole world panicked at that disaster, I was glad to know that the rods were where they were supposed to be, not vaporized and riding winds to new places. Chalk one to paranoia.

And then I was promptly horrified to know that every spent fuel rod in the facility for decades was still there. *gulp* not good, to put it mildly. Yesterday evening was all about the desperate struggle to keep the rods underwater, and then the massive criticism of the operators for the storage of the rods in a densely packed manner (and the quantity itself), when they admitted that it couldn’t be ruled out that the spent fuel rods might achieve criticality all by themselves.

In the meanwhile, the workers had the world’s admiration, gratitude and concern as they battled the radiation for the fourth day amid increasing expert opinions that they were getting lethal doses. It was touching to essentially hear people say that okay, we know we are signing the death warrant for these people, but if we don’t far more will die. TEPCO has increased the number of workers from 50 to 322 in a bid to minimize exposure to individuals by rotating them more frequently and add some muscle to the constant job of delivering water on radioactive fuel.

Others speculated about the nature of crisis response where people don’t see the edge of danger as a forbidding boundary anymore. A few people who have worked on such reactors before shared that they would do the same, as it was the people working there who had the knowledge to prevent disaster. Still others spoke about the workers knowingly walking to their deaths as a manifestation of the Japanese bravery in dying for the greater good. Still others speculated that perhaps the workers knew that they already had a lethal dose, and that they could save others.

Whatever the speculation, the workers are still nameless, faceless. Of course they don’t have time at the moment to do media interviews. This is one instance where I wish they come back safe and sound and give so many interviews that people can’t watch TV without tripping over them. But come back safe. The world is anxiously watching over them. Twitter has tags specially for praying for them and talking about their bravery. Not that we know much about them at all at this point. Mostly imagination from the news we get.

When I slept last night (okay, this morning) TEPCO seemed on the verge of beginning the use of a new power line to the plant. This would be really good, because we have exhausted workers there manually running pumps to deliver a lot of water in a lot of critical places. They have already been extensively exposed to radiation, and I can’t imagine them being in bouncing health at the moment. Bouncing with neutrons, perhaps, but that is another, sad matter. Electricity would definitely help save their energy or allow them to pay attention to more things that need it. But I haven’t heard anything about it actually having started yet, which is, I hope a temporary delay and not some failure of the plan.

Other methods considered are using a helicopter to deliver water. This was not possible for a while because of the heavy radiation from the exposed spent fuel rods (open to the sky), but something seems to have changed or risked, because now there is this video of them doing it. I had imagined that they would be pouring water into the tanks to cover the rods, but apparently it seems to be more of a spraying entire area to dampen down the spread of radioactive particles.

Now that I think of it, of course. How does one hover a helicopter over a tank shooting radioactivity right back? That wasn’t what they had planned. But this is a good idea too. Less airborne radioactive particles can only be good.

There had been some talk of a water cannon – the kind used to discourage protests – to be used to deliver water straight into the exposed spent fuel tanks. Another fantastic idea. Don’t know why it doesn’t seem to have happened. Possibly clearing roads for the water cannon thing to get there?

In the meanwhile, I did not like that the Japanese government increased allowed radiation for Fukushima workers from 100 millisievert / hour to 250 (at which radiation sickness will occur). 250 is not safe. Sure, the workers are getting that and possibly more, but it would be a shame to make their extraordinary bravery into something “within allowable limits”. This is akin to saying that its okay to jump in front of a train if it is travelling at less than a certain speed rather than saying that its near suicide to jump in front of a train, but someone did it to save a child from being run over. I think they have the “right” to the honor of breaking an important safety procedure to save Japan at tremendous risk to themselves. Raising the limit to include what they are going through is demeaning because of the stricter standards of safety they new and gave up. Essentially, it seems to be saying, okay, what they are doing is not normal exposure, but it isn’t a problem, its in allowed limits. That’s totally false. They are risking their life. This is not safe. They are doing it for Japan. Japan must not “ordinaryize” their courage.

6 thoughts on “The Battle of Fukushima – Japan's Nuclear Update”