What was in the media as the old IAC seems to have split into three. There is a Kejriwal faction who are now Aam Aadmi Party, there is an Anna Hazare faction who are still going by the name IAC. However… less in the limelight is another IAC which claims to be a people’s organisation affiliated to the Hindustan Republican Association which was founded on 3 October,1924 at Kanpur (United Provinces). They say they had only given Anna, Kejriwal & Co permission to do their agitation in their name. 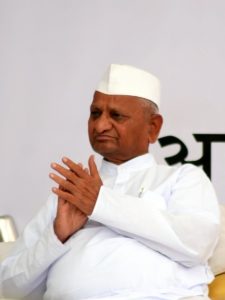 This IAC faction claims that their local IAC unit leaders were offered large sums of money to publicly support Anna Hazare’s statement in favour of Naveen Patnaik’s mineral sale and land lease policies at a meeting on 30th.November.

An email circulated by IAC-HQ claims

1. Mr K.B. (Anna) Hazare has been staying at the State Guest of Orissa enjoying Mr. Naveen Patnaik’s very lavish hospitality for himself and about 20 of his supporters from Maharashtra for past 3 days.

2. Mr Naveen Patnaik has called Anna to Orissa to extol the virtue of the State Govt policy to sell its resources to a few private companies including foreigners.

3. At a meeting yesterday, violent fights broke out on stage between various factions of IAC local unit activists, BJD party workers and some people describing themselves as Anna India Against Corruption.

4. Yesterday night Anna’s people offered a huge bribe of Rs. 2 crores to IAC local leaders to switch over /defect to them.

5. Local IAC leaders are very principled and suggested that Anna should address a meeting today at 1.pm at Bhubhaneshwar to see mood of the public.

6. At today’s meeting, Anna’s team again offered the huge bribe before meeting started. Violent fights broke out and Anna and party ran away.

7. These facts should be in media by niw. But Patnaik’s party managers would have twisted the facts by now as whole media starting from Barkha Dutt and Vir Sanghvi are in his pocket..

A fact finding team is leaving from Kolkata and will be reaching Bhubaneshwar tomorrow afternoon.

Meanwhile, another email says that about 20 persons from both sides were taken into preventive custody. The matter has been compromised and everyone is let off. Most of the money (about Rs. 12 lakhs after “expenses”) has been returned, and Anna Hazare and party are leaving B’bsr very soon.

Comments: was the money offered 2 crores or 12 lakh? Or was 12 lakh the amount confiscated? Or was that 12 lakh the money with Team Anna overall?

Also last week, Anna Hazare spoke in support of the anti-Poscoe agitation, condemning government policies. This was reported in newspapers. Now there are claims of him paying bribes to get support for him taking an almost opposite stand? So there is more on the ground not yet in thews.