While Jammu and Kashmir has always had among the lowest suicide rates (0.3% of all suicides) in India, statistics show a rising trend (44.3% more in 2012 than 2011) as opposed to a slight decline (0.1% less in 2012 than 2011) in the overall national figures. The dramatic increase is concerning in a state where the ongiong conflict creates a volatile situation or the youth. 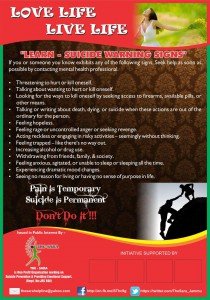 Dr. Raminder Jit Singh knows loss personally. Every decade of his life had been dotted with people he cared about logging out of life, leaving behind bewildered families. His cousin’s suicide left behind a wife and three children, and it was the impetus that led him to start The – Sara.

‘The – Sara’ is the first Registered Non – Profit Organization  working in the field of Suicide Prevention & providing Emotional Support in the State of J&K. ‘The – Sara’ is a non-religious, non-political and non-sectarian Organization formed by a group of like minded professionals, Health Care Givers, Business people, Artists, Homemakers, Engineers, Teachers and Retired Government Employees dedicated to the cause of Suicide Free Society.

Recent Activity – ‘The – Sara’ in March 2013 carried out a Pamphlet Campaign on an issue “How to deal with Exam Stress”. This initiative was supported by Companies/Brands like AOC India, Jammu & Kashmir Bank Ltd., Vodafone and Simula Infra Development. (Pamphlet attached)
Present Activity – at present we are working on a Project “Epidemiological Study of Suicides in Jammu” in co-ordination with J&K Police. (Permission Proof attached)Upcoming Activity – Continuing with our commitment towards our cause and Society ‘The – Sara’ is planning to carry out Pamphlet Campaign with the Theme “Learn Suicide Warning Signs”. These Pamphlets will be distributed in various parts of Jammu & Kashmir.
Future Activity – we have moved Proposal with IGP Jammu Zone for establishment of “Suicide Prevention & Emotional Support Center”. DGP of J&K Police has agreed to take up this Project under Civic Action Programme. This S.P.E.S Center shall provide On-line, Telephonic and Face – to – Face Counseling Services. This proposal is facing numerous glitches. (Proposal Proof attached)