Ever since Anna Hazare’s fast began, Indianot care? Why doesn’t Indian media talk about us? Why does a decade long fast not bring attention?

What does one say? We’ll have to begin by telling people that the Manipur they hear about is a proper state in what is collectively dismissed as the north east. Manipur, indeed the north east itself can be compared with the little toe of your foot. Its there, losing it would definitely hurt, but its not something you are aware of having in your body under usual circumstances. Sad, but true.

I rarely advocate anything for others. My advocacy is limited to my beliefs based on what works well for me. I can only share my reflections. The questions and answers that emerge in my mind when I think of this Iron lady of Manipur, Irom Sharmila.

When I first heard of Irom, I thought it was a publicity stunt. I’m not proud of it, but its true. That IS what I thought. A ten year fast and the woman is still in reasonably good health? Okay, next joke!

I don’t imagine I was alone in thinking this. What people don’t realize is that she IS fasting, even though medically, her naso gastric tube means that she is not. Whoever thinks that this is having her cake and eating it too, needs to be fed through a tube to discover how much fun it is…. NOT. Without getting into the why’s of it, suicide is a crime in India. Attempted suicide, that is. Apparently the country owns you so thoroughly that you don’t have a choice over your own life and death and you are arrested because you attempted to kill a citizen of this country. Nice.

Thing is, with this bizarre logic, she gets arrested, force fed. When she completes her sentence and is out, she is still not eating, so she gets arrested and force fed again. This insane cycle has been happening for  a decade now. So, while the average skeptic of a ten year fast is right in KNOWING that you can’t live for ten years without food, he is wrong in believing her to be cheating in some way and thus dismissing her protest.

For what its worth, she has not voluntarily eaten for a decade! 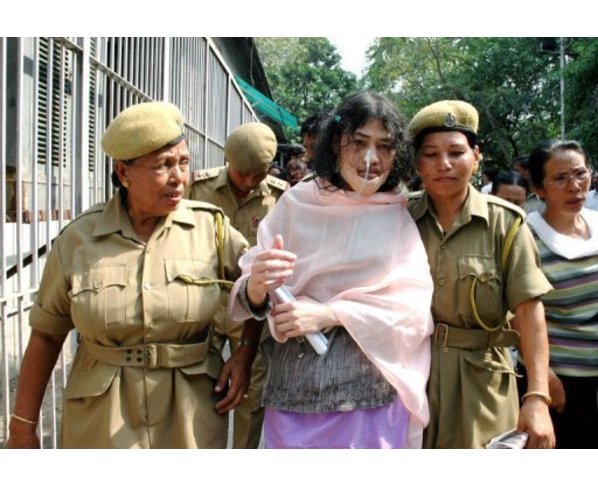 Which brings me to the second point. That which is being said about Anna Hazare too. A fast is undemocratic because its a form of blackmail. Personally, I have no issue with fasting, fasting to death, commiting suicide, etc. I firmly believe that it is that person’s life. I also believe that its not murder to let a fasting person starve to death out of choice. It is raising the stakes on a political demand and imposing a very short deadline. Pun not intended.

In this sense, those that call it terrorism, could have been justified, IF there was  a rule that said that if someone fasts, all his demands must be met. There is no such rule, as we see with Irom. The pressure to give in to demands can only happen from the demands being indisputably right and important enough to enough people that the government refusing demolishes the government’s credibility – as we see with Anna. Anna’s fast was hardly the news. It was the wave of protests sweeping the country that won the day. We still don’t even know the names of all the people who undertook to fast to death by Anna’s side. Not because they weren’t important, but because the movement had used the occasion of the fast to erupt in a countrywide outrage. This outrage was what got the government to give in, not the fast. Without the outrage, Anna would have been another Irom. Make no mistake, the government didn’t give a shit that way. They would have fed him one way or the other once his life seemed to be under threat. NO WAY would they have let his death be the monument to immortalize the allegations against them in people’s memory. With the scale of the outrage, this was impossible, and thus Anna’s fast became successful. Or, in other words, the movement became successful and Anna ate.

That’s how these things work.

When that deadline is bypassed by force feeding, in one stroke, both the high stakes as well as the deadline are gone. Simply put, it is no longer a crisis. It has been “managed”. Then comes the whole resentment against the force feeding, the anger that such a long sacrifice has gone waste, etc. To the government, that is like any other resentment and anger. The threat has been neutralized. Now, the anger around Irom’s sacrifice only serves to distract from the actual issue – AFSPA. The government will shuttle words to the end of time.

I have said earlier, I believe it is each person’s right to choose life and death to the extent they are able. Arresting someone for suicide is a double insult. In essence, we are telling an utterly depressed and defeated person that they are wrong and piling on more shit to what he is buried under by calling him an aggressor against an innocent citizen – when in reality he is both. Punishing him insults his suffering as meaningless. I don’t think this is a good thing. Such a person probably needs a psychologist intervening on his behalf with limited protective custody post which the person should be free to die if they wish. The objective being to enable the person to find some opportunities to want to live rather than preventing death.

Just clarified that, to set the background for what’s coming. And I am trying to say this as melodrama free as I can from a perspective purely of cause and effect. None of this is my endorsement for or against fasting or the AFSPA. I am simply speaking about what the objective is, and what is happening.

I think Irom should halt her fast. By allowing the government to keep demonstrating itspower over her, she weakens her own strength. What does it mean to fast unto death knowing that you will not be allowed to die? Her credibility is thoroughly destroyed because of these cheap tactics by the government. I support her that she has full right to fast and die if that is what she wishes, but it is serving no one and only creating more distractions from her real goal – getting the AFSPA repealed. The more time is spent talking about Irom, the more time it is spent in not pushing for the repeal, because the stake of her life attached to the repeal is no longer true.

In her place, I would be changing tactics. Or, I would be rallying up the kind of support that makes it impossible for the government to refuse. Not asking an India who barely knows Manipur exists, has the Army stationed or has any problem with it; but the people themselves. You don’t need India to protest to create change in Manipur. Anna Hazare, whose fasts are raising Irom’s question now has done movements in Maharashtra that brought change in Maharashtra with the rest of India barely coming to know that anything happened. India stood this time, because the change was for India. To get rid of the AFSPA in Manipur through Irom’s fast, it is going to take the people of Manipur and the north east to stand shoulder to shoulder with Irom, as they stood shoulder to shoulder with Anna.

If their belief in the cause is large enough, it will force the people administrating Manipur – the state government and Army to relook at matters. We see this happening in Kashmir. The AFSPA may not be repealed, but the human rights abuses are getting increasing attention toward resolving. Who knows what the end result will be? Who knows what Manipurs story will be? It will have to be written by Manipur.

For the record, I am stating that I believe the Army when it says the AFSPA makes it easier for them to pusue criminals. On the other hand, they have so thoroughly lost the accountability for the abuses arising from it, that I wouldn’t shed tears over them losing the easier way of doing things. After all, while I am patriotic, it is the soldiers who get paid to take risks. Not civilians. Either set up some means of recording every use of the AFSPA and investigating any conflicts, or get rid of the AFSPA. I say this either/or thing, because without accountability, the Army can do just as much damage without the AFSPA as with, and it will only have lost a tool against militants with no real gain for the people. So, to me, the human rights abuses are more important than the AFSPA, but I’m happy to have it shut down in the absense of accountability, investigations and justice.

I hesitated a long time to say this, because it seems callous to talk like this about someone’s suffering. To tell them to get their act together or abandon the method. Then, I questioned myself whether the point was in giving the politically pleasing answers of moral support and no change, or in supporting the struggle – in which case, my truth as I understood it could still be my support from Mumbai. It will take Manipur to change Manipur. It will take the northeast as a whole to rally behind Irom to change the whole north east. If this is not happening, then there needs to be some reflection around why that is so. Why are the Manipuris or the Northeasterners not rising up to support the leader they talk about so much.

Arundhati Roy is right when she says that a Satyagraha needs an audience, but the audience is not the media, but the people around to rise up and power the movement, and not applaud from the sidelines. Pleading to the media is useless unlesss a large number of people are able to risk themselves standing up. After all, its a democracy. What people want, happens. If they want to watch and munch popcorn, that happens too.

If no solutions are found, Irom’s fast frankly doesn’t matter. I have tremendous respect for her as a person of integrity. A person who took on the system how she could and stayed with the struggle for an unbelievably long time. That is on a personal level. As part of creating change, its not very useful on its own. I know it sounds heartless, but whatever the critics say, fasting is not particularly successful blackmail. Rather than make it a monument to how easily the demands are abandoned to one person, she should call a halt to the fast, stop being a symbol of a non-happening hope and do something else that engages more people if the original objective of repealing the AFSPA still stands. Then, with greater energy of people with her, she can address her objectives.

Main thing is of course the support she should be getting, if people believe in her cause.

6 thoughts on “Why is Indian Media treating Irom Sharmila as a step daughter?”