We are living in times where groups which win the battle of media often succeed in serving their purposes/propaganda. Our founders had expected that media shall stand as a fourth pillar of Democracy to make it vibrant. Media shall provide power to the people and make them believe in Democratic principles. Reality however did not encompass the expected. This fourth pillar of Democracy, instead of standing up with people as a fourth underpin, as a fourth guard is apparently dominating even the other three pillars. Instead of strengthening the people, it is often making them weaker, helpless and undermining the essence of Democracy. Media, therefore cannot be ignored now. It is an inescapable fact of life. Ravish Kumar of NDTV India says, “Sanchar madhyam bimar ho gaya hai, aur wah janta ko bhi bimar kar raha hai”.

Architect of Indian constitution, Dr. Ambedkar’s below thoughts are relevant and apt here. He says, “Journalism in India was once a profession. It has now become a trade. It has no more moral function than the manufacture of soap. It does not regard itself as the responsible adviser of the public. To give the news uncoloured by any motive, to present a certain view of public policy which it believes to be for the good of the community, to correct and chastise without fear all those, no matter how high, who have chosen a wrong or a barren path, is not regarded by journalism in India its first or foremost duty. To accept a hero and worship him has become its principal duty. Under it, news gives place to sensation, reasoned opinion to unreasoning passion, appeal to the minds of responsible people to appeal to the emotions of the irresponsible. Never has the interest of country been sacrificed so senselessly for the propagation of hero-worship. Never has hero-worship become so blind that as we see it in India today. There are, I am glad to say, honourable exceptions. But they are too few and their voice is never heard”. 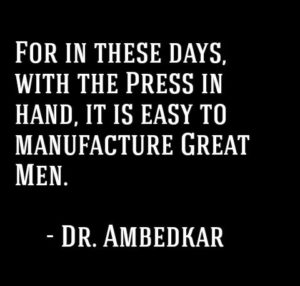 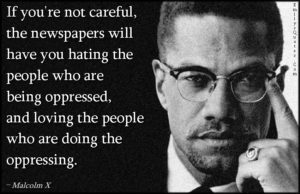 We, a group of young Indians in Mumbai began our journey with the Initiative of ‘New India Debate society’ in 2014 with the below idea in mind:

New India debate society has been making an attempt to interpret and comprehend Ambedkar in a holistic manner trying to locate the missing thread of ‘his nationalism’. This we do and shall continue to do so in a strict academic discipline and hence the initiative has been considered only as an academic pursuit with no ulterior motives of any social or political action.

Though, we were always of a mind that we will welcome any action springing out as a result of this exercise which would give India a push towards its ultimate destiny – a destiny common for all the elements of the national life.

In line with the said thoughts, we lately came up with the idea of IFIL – INDIAN FIRST INDIAN LAST.

IFIL – (which may also be read as I-Feel) is an initiative which envisages to generate and provoke a kind of Public conscience among Indians which rises above the closets of Caste, Creed, Religion, Language, Region, even Nationalism and creates a mindset to fight against any form of Injustice.

Meaning of I-FEEL(IFIL) is that ‘I am Sensitive’. I feel the joy and pain of each Indian and I pledge to stand-up for the people in need with full sincerity.

IFIL also means ‘I-FILL’, I shall determine myself to fill the expected democratic and progressive leadership which at present, is regretfully lacking in Indian society.

We intend to launch the IFIL initiative with one such activity. We have organised a demonstration ‘In solidarity with the emerging democratic, progressive voices in Indian media’ on Monday, 14th March 2016 at Azad Maidan, Mumbai between ⏰3:00 p.m to 6:00 p.m. ⏰ 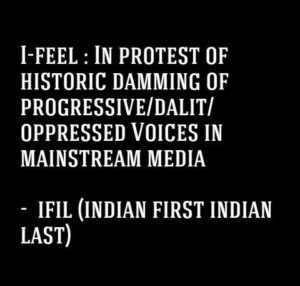 This is to express our solidarity and support to some exemplary voices we heard and observed during the tragic Rohith Vemula or JNU episode. These voices (like Ravish Kumar of NDTV India, Nikhil Wagle of Maharashtra One TV, Sindhu Suryakumar of Asianet etc) went against the flow of otherwise Profit-making, Capitalist, Brahminical & populist image of Indian media. Amidst the noise of ‘deshdrohi, deshdrohi’, these mediapersons gave a voice to the oppressed in unprejudiced manner and discharged their duty of digging out the truth behind the stories. For such courageous journalism (fourth pillar of democracy) and their democratic spirit, they certainly deserve a word of recognition from the responsible citizenry. 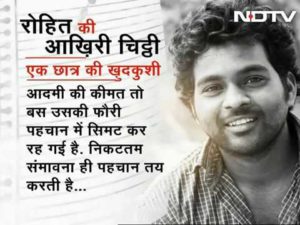 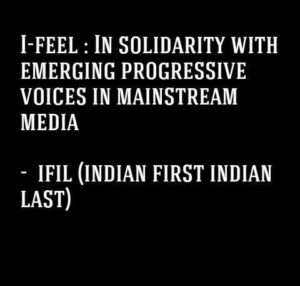 P.S: The demonstration is not in support of some specific people in media but with all those sincere democratic voices in Electronic, Print or even Social media.

You can also register through the below Facebook event link.

Demonstration in Solidarity with the emerging Democratic, Progressive voices in Indian media’