Yesterday, a young man and sole bread winner of a poor family lost his life in a tragic and completely avoidable accident that should serve as a warning for people to not treat nature and its risks lightly.

This is the waterfall rappelling site at Mahuli as seen from the top. 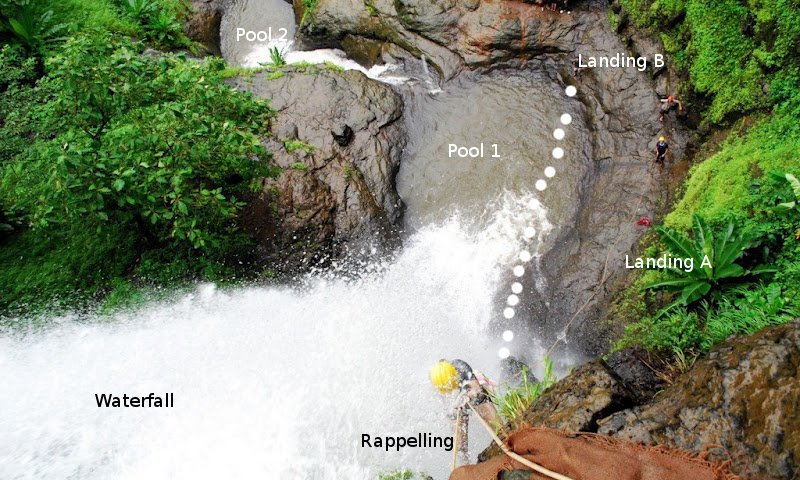 This photo is during peak monsoon. You can see the rope extending to the bank of the pool. This is for safety. The actual landing point is not visible here. It is directly below the two participants.

The actual landing point cannot be seen from here, but it is directly below the two participants you see going down the rope in the waterfall. Participants land below on a slippery ledge behind the water, and either follow the slippery ledge out to dry land (you can see the rope in the photo going to Landing A) or they enter the pool and wade through the water to come out at Landing B (shown by dotted line). In either case, participants remain roped onto the safety rope till they are completely on dry land. This means no wading through the water, no walking on slippery ledges without being roped up. The reason being that a waterfall this tall also generates whirlpools and strong undertows even in water you would normally think easy to walk through. This is known to instructors and is an explicit instruction for participants.

It is also fairly evident from the difficulty people face in wading through seemingly still water that it isn’t as calm as it appears. On other days, like yesterday, with the monsoon waning, the water seems even more harmless. The flow is reduced, the undercurrents are reduced. But NOT the whirlpools, which are more from the fall of the water than its quantity. This is why it is important to listen, listen, listen to safety briefs, particularly things expressly forbidden.

This participant, against all advice to the contrary went down the “slide” from Pool 1 to Pool 2 below and got stuck in the whirlpool, unable to come out. Even as he went into the water, there were people telling him not to do it. He did not listen. Perhaps by the time he realized the danger, he was already in the slippery part and under the influence of the water. No one really knows. What they do know is that he failed to come up again, so people went to the lower pool in search of him. He was gone. Two instructors and about half a dozen participants
spontaneously linked hands to form a human chain and try to reach him, feel under the surface if they could, but to no avail.

The instructor on top got irate when he realized that the bottom of the rope had been left unattended resulting in a delay in the activity, when he realized what had happened. With the participant underwater for over five minutes by then, he called for activity wind up, realizing that he was dead, or even if found alive by some miracle, he would need to be rushed to hospital.

Police were called. Locals gathered. A local diver arrived with the police. Apparently he fishes out dead bodies from such whirlpools. Many such accidents happen. Always from carelessness. People don’t realize how strong the water is. He dived into the water and got the body out in five minutes. It was intact. Complete with jeans, boots. Clearly the guy had no clue of how deep or dangerous the situation was. He wasn’t even stripped for swimming and yet he had drowned in such a way that over half a dozen people couldn’t even fish his body out with combined efforts and it took a diver.

The participant had come with a girlfriend. The group kept her from seeing the dead body then and there. She was devastated, but like everyone else who cautioned him, helpless against the will of someone “having fun”. The instructors were taken in for questioning by the police, let go when it was clear that the accident was not because of their carelessness.

What remains behind is a devastated family without its breadwinner, traumatized girlfriend, horrified group of participants, some of whom completed the activity they came for, others not, all plunged into a macabre rescue, then retrieval operation. Instructiors whose professional reputations now have an accident, even if not their fault in an industry where your reputation for safety is everything.

I spoke with Hemant, the chief instructor for a long while. What could be done to prevent such accidents? He thinks it cannot be stressed enough that participants follow safety briefs. It is easy to come on a trip and feel invincible in the moment and dismiss what seems like childish suggestions to stay in one place, avoid something, wear helmet, not stand under the waterfall, etc but those instructions are there for a reason and they are there because instructors know the activity and location and want to keep participants safe. It is possible to violate them and be unharmed that time, but that doesn’t make it safe.

It is possible to stand under a waterfall and not be hit by a falling rock, but that doesn’t mean that rocks stop falling or the next one won’t get you.

When I did my mountaineering course, I was irritated that the girl’s course was designed easier than boys. My remark to the institute was that an avalanche doesn’t care about the gender of those it buries. The forces of nature are beyond the capacity of man to overcome when it comes to raw power. There is no bravery in making a show of it. Famous mountaineers have reputations of safety, not stunts.