We flare in outrage and vanish with a whimper. Flashpoints blazing in the otherwise dusk of law and order. The whole country outrages over a murder on the streets in Mumbai or a gang rape in Delhi, but these are stories being repeated nationwide and forgotten consistently. 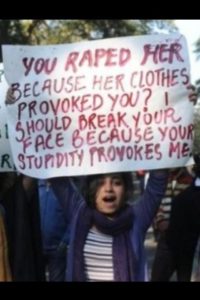 Local newspapers with news reported by citizens and published electronically as well as on cheap newsprint.

These should be really local, comprising a few villages or localities. They should cover local crime reports and news related with civics, rights and other happenings locally. Sponsored through sales of papers and perhaps donations and a few ads. News can be submitted by citizens throught email, SMS or perhaps tweets. There should be an attempt to get news from the grassroots, rather than simply recycling news published in newspapers, though this shouldn’t be ignored.

Maps with local crimes against women, which volunteers should take up to follow right up to the process of justice. Nothing major, but perhaps staying in touch with the victims on phone, asking after dates in court, status of case, delays, and so on.

We can also experiment with the possibility of local protest groups to create pressure in cases of injustice. For example organizing protest marches to homes of criminals if police won’t arrest them. Or protests demanding dismissal of authorities that ignore rights of women, or corrupt Panchayat leaders.

Of course, it will be difficult to define the limits of this initiative and will depend on the people volunteering in each area.

However, this should be a nationwide network with resources shared, like legal advice, protest ideas, posters, online support from all over the country for local initiatives, and so on.

What do you think?

I am planning on creating two crowdmaps for the data, for these two, details of which I will post soon.

For the rest, planning to currently use posts like this one, and eventually, if they turn out successful, we can work out proper websites and such.

If you are volunteering, please inform me and I can add you to the system,

Hoping to create a network which is highly automated and decentralized.